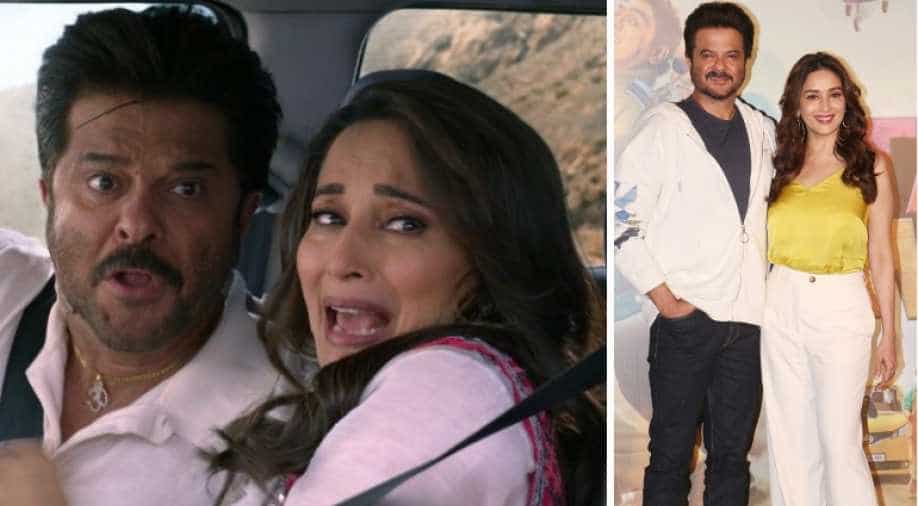 Anil Kapoor and Madhuri Dixit in a still from 'Total Dhamaal' and the actors pose during the trailer launch event. Photograph:( WION Web Team )

From unbeatable comic timing, to catchy punch lines, to upbeat music, the trailer features everything that one can expect from a Bollywood comedy film.

They ruled the box office in the 1990s and now veteran stars Anil Kapoor and Madhuri Dixit will be seen sharing the screen in Indra Kumar's film 'Total Dhamaal'. The film, though features a gamut of stars along with the two actors. Ajay Devgn, Arshad Warsi, Riteish Deshmukh Jaaved Jaaferi, Sanjay Mishra and Johnny Lever are also part of this comedy which is a sequel of 2007 film 'Dhamaal'.

From unbeatable comic timing, to catchy punch lines, to upbeat music, the trailer features everything that one can expect from a Bollywood comedy film.

Apart from the obvious, the trailer also has a surprise element that the filmmakers did not give away in the posters of the film. The 2.49-minute-long clip features Sonakshi Sinha, who can be seen dancing to a number in the film. The trailer also features a remix version of the 1985 song `Paisa Yeh Paisa` where the stars can be seen shaking a leg, all dressed in blue.

While the excitement around the film is high, considering it is a sequel of a hit film, fans are eagerly waiting to watch Anil Kapoor and Madhuri Dixit in a film together. The duo have reunited after 19 years making the film even more special. The two were last seen sharing screen space in the 2000 Thriller/Drama `Pukar.`

'Total Dhamaal' is scheduled to hit the big screens on February 22.