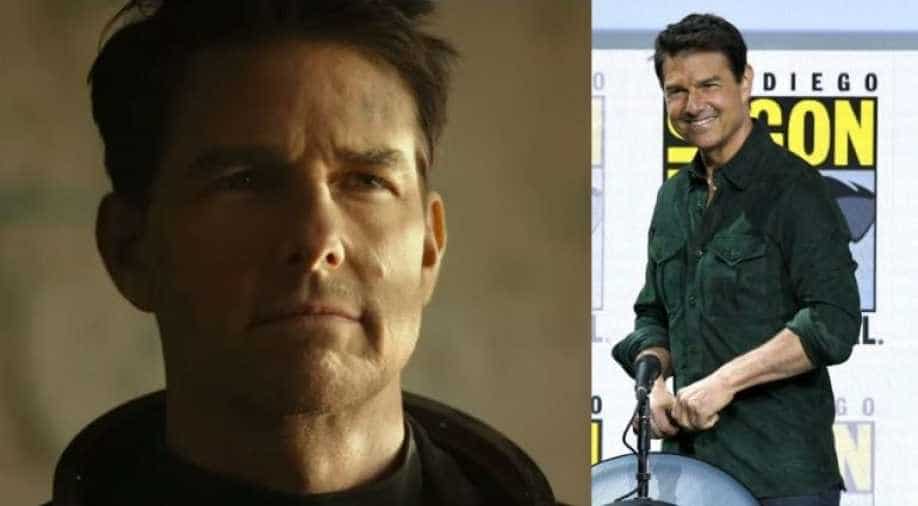 Tom Cruise in a still from 'Top Gun' and the actor at the Comic-con (Still from Youtube/Paramount Pictures) Photograph:( Others )

Tom Cruise swooped into San Diego Comic-Con on Thursday to unveil the world-first trailer for 'Top Gun: Maverick,' which he described as a "love letter to aviation."

Tom Cruise swooped into San Diego Comic-Con on Thursday to unveil the world-first trailer for 'Top Gun: Maverick,' which he described as a "love letter to aviation."

The Hollywood A-lister arrived unannounced in the pop culture gathering's cavernous Hall H along with footage of the long-awaited sequel to the 1986 smash action film that made him a household name.

"You all have asked for many, many years.. I travel around the world, people say, why don't you do another one, when are you are going to do another one?" he said to a rapturous crowd.

"Thirty-four years you guys have been very patient with me, and I felt it was my responsibility to finally really deliver for you."

Footage revealed few plot details, but showed Cruise's Pete 'Maverick' Mitchell as an ageing pilot who refuses to retire, despite failing to rise up the ranks.
Swooping shots of fighter jets launching off aircraft carriers were "all real" and the result of working closely with US Navy officials, Cruise said.

"I really wanted to give you all an experience of what it is to be inside that aircraft ... It's a love letter to aviation," Cruise said.

The trailer also showed Cruise racing a motorcycle in his iconic leather jacket, and singing with friends in a bar.

The original Top Gun received mixed reviews but was a huge commercial hit.

Directed by Tony Scott, Cruise played a hotshot US Navy pilot who has a dangerous and reckless flying style.

He struggles to balance life, responsibility and a love affair while competing at the Navy's fighter-weapons school.

The blockbuster was based on a real training program that was known as Topgun and based at San Diego's former Naval Air Station Miramar.

The film catapulted Cruise to the ranks of Hollywood's elite and has since become something of a cult classic.

The studly cast, catchy pop soundtrack and high-powered aerial sequences both entertained moviegoers and fueled interest in the military.

Navy recruiting officials reportedly saw a dramatic uptick in inquiries from would-be flyboys following the film's release, with military recruiters in some cities setting up tables outside cinemas.

A sequel has been hinted at for years.

In January 2016 Bruckheimer tweeted a photo of himself and Cruise, writing: "Just got back from a weekend in New Orleans to see my old friend Tom Cruise and discuss a little Top Gun 2."

Cruise confirmed plans to shoot the sequel in an interview in 2017. 'Top Gun: Maverick' will be released in summer 2020.

Helen Reddy, singer of feminist anthem 'I Am Woman', dies at 78