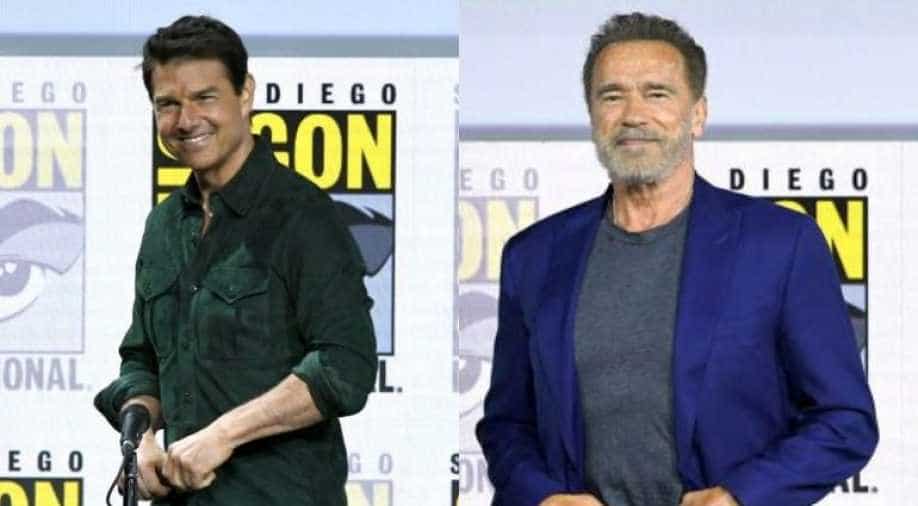 A-lister Cruise surprised an ecstatic crowd at the world's largest pop culture convention in California with first footage of the long-awaited sequel to the 1986 smash action film that made him a household name.

Hollywood '80s nostalgia soared at San Diego Comic-Con Thursday as Tom Cruise swooped in to unveil the new 'Top Gun' while Arnold Schwarzenegger revealed why he'll be back for an explosive-looking 'Terminator'  sequel.

A-lister Cruise surprised an ecstatic crowd at the world's largest pop culture convention in California with first footage of the long-awaited sequel to the 1986 smash action film that made him a household name.

Describing ' Top Gun: Maverick' as a "love letter to aviation," Cruise introduced clips of his ageing pilot still launching jets off aircraft carriers, refusing to retire despite failing to rise up the ranks.

The aerial shots were "all real" and the film -- out next summer -- is the result of working closely with US Navy officials, Cruise said, adding: "I really wanted to give you all an experience of what it is to be inside that aircraft."

The original 1986 'Top Gun,' in which Cruise played a hotshot US Navy pilot who has a dangerous and reckless flying style, was a huge commercial hit.
The new trailer featured familiar images of Cruise's Pete ' Maverick'  Mitchell racing a motorcycle in his iconic aviator sunglasses, and belting out tunes with friends at a bar.

Addressing the long wait since the original, which was partly filmed in San Diego, Cruise said: "Thirty-four years you guys have been very patient with me, and I felt it was my responsibility to finally really deliver for you."

Cruise's shock appearance came at the end of a presentation for another Paramount sequel -- 'Terminator: Dark Fate.'

Star Arnold Schwarzenegger said he was "addicted" to the killer cyborg franchise that "really launched my action movie career."

"Of course I needed to come back," said the former bodybuilder and California governor, who has featured in four of the five "Terminator" movies to date.

But it was the return of Linda Hamilton that dominated both the exclusive footage shown to attendees, and the cast discussion in Comic-Con's cavernous Hall H which also featured director Tim Miller.

Hamilton, 62, reprises her famous role as Sarah Connor -- who she first depicted in the 1984 original, but left after 1991 blockbuster 'Terminator 2' -- and age does not appear to have slowed her down one bit.

Clips from the upcoming sequel showed an athletic Hamilton leaping from a vehicle to confront two super-powered, shape-shifting robots with an array of weapons including a gun, a bazooka and a grenade.

"My name is Sarah Connor. I hunt Terminators," she announces in the footage.

Hamilton told the packed audience how she had been hesitant because the first two films felt "very intact," but had decided to come back so she could "rock it as a woman of a certain age."

James Cameron, who also returns to the franchise as producer for the first time since 'Terminator 2,' appeared via videolink from the futuristic set of the 'Avatar' sequels.

He confirmed that Eddie Furlong, who portrayed John Connor as a teenager in 'Terminator 2,' will also reprise his role.

Director Tim Miller said the new 'Terminator,' out November 1, would be R-rated following fan demand for a darker, grittier sequel.

HBO and the BBC wrapped up proceedings in Hall H with a Q&A for their forthcoming television adaptation of young adult fantasy novels 'His Dark Materials.'

Lin-Manuel Miranda, Ruth Wilson and James McAvoy star in the show released this fall, set in author Philip Pullman's vision of a parallel universe ruled by a dogmatic dictatorship called the Magisterium.

Religious bodies have condemned the text as an attack by atheist Pullman on the Roman Catholic Church.

"I don't know if it's purely Catholic," said Wilson. "Obviously Philip was probably referencing that in the books, but for me it's more about an authoritarian kind of dictatorship."

BBC executive Jane Tranter said: "It doesn't equate to any particular church or form of religion in our world."

The 50th anniversary edition of Comic-Con International brings 135,000 hyped-up devotees to a sweaty San Diego convention center over four main days, packed with glimpses of the next mega-hit films, TV shows -- and a few comic books.