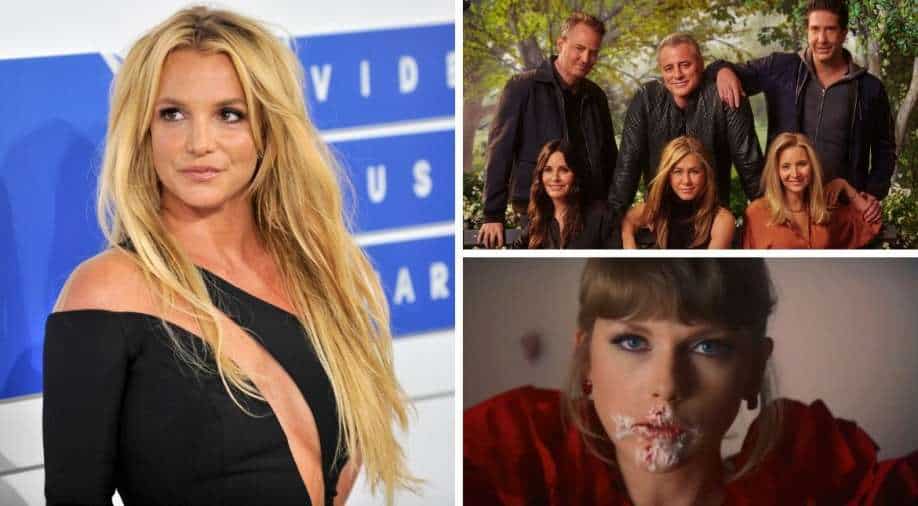 Britney Spears, Taylor Swift, and the 'Friends' cast were some of the newsmakers of 2021 Photograph:( Twitter )

From the return of cinema`s favourite spy to 'Friends' reuniting, an array of stories dominated entertainment news headlines this year.

From the return of cinema`s favourite spy to 'Friends' reuniting, an array of stories dominated entertainment news headlines this year. Below are some of the biggest stories.

* After several delays, the release of James Bond movie 'No Time To Die' gave pandemic-hit cinemas a much-needed boost.

Studios shuffled schedules and in some cases, films were released simultaneously in cinemas and on streaming platforms.

* Taylor Swift and Billie Eilish took the top prizes at the Grammy Awards while Beyonce became the most awarded female artist in Grammy history, with a total of 28 wins.

The Oscars saw "Nomadland" scoop best picture and best director for Chinese-born Chloe Zhao, making her the first Asian woman and only the second woman ever to win the prize.

* US television network NBC dropped its broadcast of the 2022 Golden Globes after a backlash over the ethics of the HFPA group which hands out the annual film and television awards and its lack of diversity. The group has said it has made sweeping changes and will hold its ceremony in January.

* Now living in California, Prince Harry and wife Meghan sent shock waves when, in an interview with Oprah Winfrey, Meghan accused Britain’s royal family of raising concerns about how dark the skin of the couple`s first child would be.

She said the stress of life as a royal newlywed had pushed her to the brink of suicide.

* Pop star Britney Spears regained control of her personal life and money when a judge ended a 13-year conservatorship after a long legal battle.

* Cinematographer Halyna Hutchins was killed when a gun held by actor Alec Baldwin fired off a live bullet on the set of Western "Rust". Baldwin said the revolver went off when he was cocking the gun. The incident is being investigated.

* Ten people died in a stampede at Travis Scott`s Astroworld Festival in Houston. Lawsuits were filed against the rapper and promoters.

* In music, ABBA released their first album in 40 years. Adele stormed the charts with comeback record "30". Swift released re-recorded albums to take back control of her early catalogue.

Singer R. Kelly was convicted by a federal jury of sex trafficking.