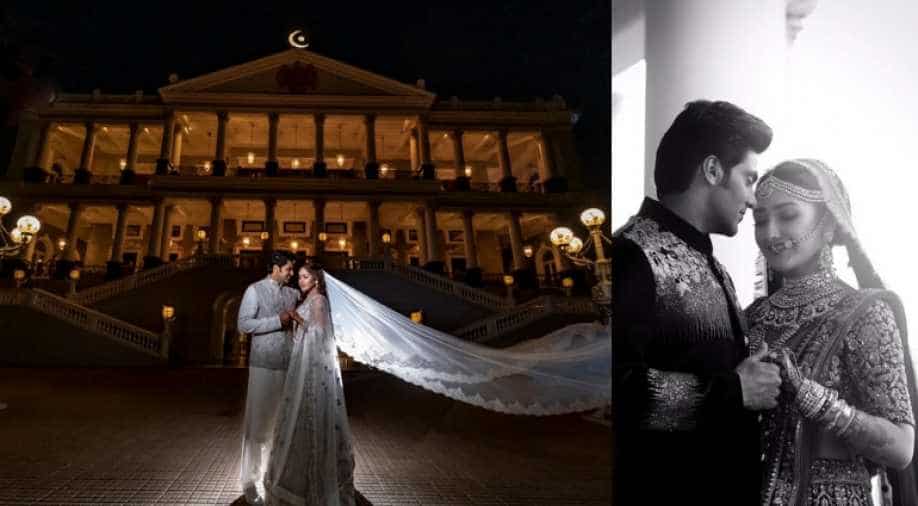 Arya shared photos of his bride Sayyeshaa and him on his Twitter page. (Images via Twitter/@arya_offl) Photograph:( Twitter )

The couple got married on Sunday at Hyderabad’s Falaknuma Palace in the presence of friends and family.

Wedding season is upon us and southern stars Arya and Sayyeshaa are the latest stars to have tied the knot. Sayyeshaa is the grand-niece of actress Saira Banu and had made her debut in Ajay Devgn starrer 'Shivaay' a few years back. She is actors Sumeet Saigal and Shaheen's daughter. The groom, Arya, is a well-known actor in Tamil cinema. The couple got married on Sunday at Hyderabad’s Falaknuma Palace in the presence of friends and family.

Pre-wedding festivities began at the Falaknuma Palace over the weekend with the couple hosting a Sangeet ceremony on Friday and a pre-wedding reception on Saturday where they wore coordinated outfits in white.

For their wedding, Arya wore a black sherwani while bride Sayyeshaa glowed in a red and gold lehenga. Prominent southern stars like Karthi, Rana Daggubati,  Suriya Sivakumar and filmmaker Rajsekar Pandian were seen at the wedding. Sayyeshaa's grand-aunt, actress Saira Banu was also part of the celebration.

Videos and pictures of their wedding and pre-wedding ceremonies have been doing the rounds of social media.

The couple worked together in Tamil film 'Ghajinikanth' and fell in love during the making of the film. They announced their engagement on social media on 14th February.