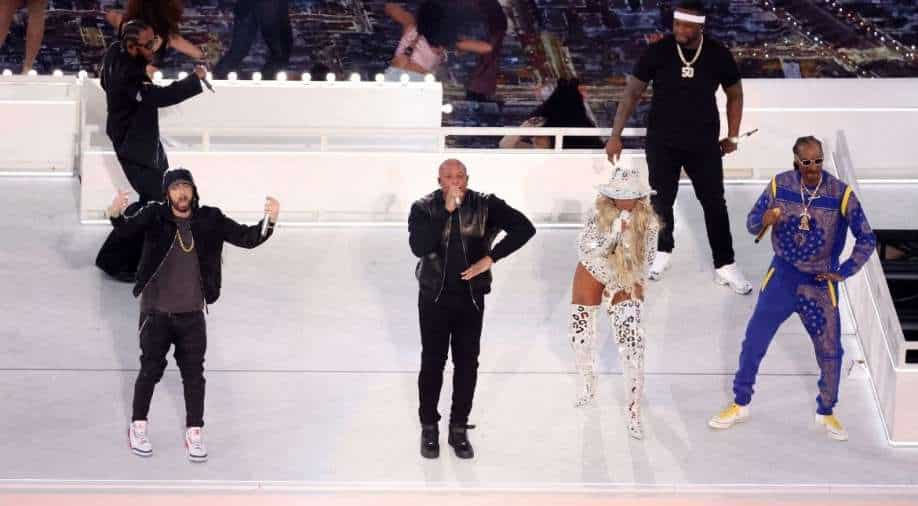 The halftime show was kickstarted by Snoop Dogg and Dre with their performance on 'The Next Episode' and 'California Love'.

The halftime show was kickstarted by Snoop Dogg and Dre with their performance on 'The Next Episode' and 'California Love'.

50 Cent was next to join the party in a surprise appearance, starting off literally upside down to perform 'In Da Club' with a bevvy of female dancers dancing along.

The highlight of the star-studded show was Eminem's act, who performed his Grammy and Oscar-winning number 'Lose Yourself'. The veteran rapper ended his performance by kneeling down and placing his head in his hand, a gesture that former quarterback Colin Kaepernick made during the National Anthem at NFL games as a call for racial justice.

Superbowl also witnesses a first as deaf rappers Sean Forbes and Warren 'WaWa' Snipe took to stage to perform American Sign Language renditions of each of the songs. It was the first time that NFL incorporated sign language performances as part of the halftime show.

Dre, 56, served as the headliner, and said ahead of the performance that it would be "one of the biggest thrills of my career."

"I'm extremely excited to share the stage with my friends for the #PepsiHalftime Show," Dre captioned a photo of the group back in September.

"This will introduce the next saga of my career… Bigger and Better than Ever!!!"

The night was not without its share of controversy though. Days before Super Bowl, rapper Snoop Dogg was accused of sexual assault and battery in a lawsuit filed by an unnamed woman. The rapper has so far denied the allegations, calling the lawsuit "a shakedown."