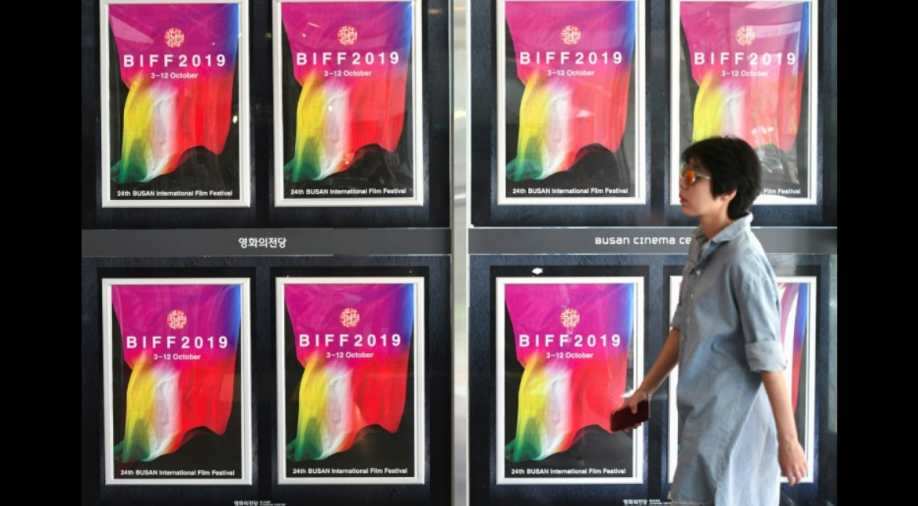 A woman walks past posters for the Busan International Film Festival at the Busan Cinema Center in South Korea Photograph:( AFP )

Local A-listers Jung Woo-sung and Lee Hanee took to the stage as hosts and welcomed international cinema heavyweights including Philippine screen queen Judy Ann Santos, who arrived in Busan for the world premiere of 'Mindanao' with director Brillante Mendoza.

The night sky cleared over Busan Thursday after days of rain and wind as the city prepared to host Asia’s largest film festival and to welcome a glittering array of stars from across the movie world.

Local A-listers Jung Woo-sung and Lee Hanee took to the stage as hosts and welcomed international cinema heavyweights including Philippine screen queen Judy Ann Santos, who arrived in Busan for the world premiere of 'Mindanao' with director Brillante Mendoza.

British Oscar nominee Mike Figgis ('Leaving Las Vegas') was in town to head the jury for the festival’s main New Currents award, and said he was "excited by the journey ahead of us" over the next 10 days.

Host Lee urged guests -- and the tens of thousands of fans who flock to the festival each year -- to celebrate the "diversity on offer and discover unknown films".

Other stars gracing this year’s festival across its run include Oscar-nominated 'Call Me By Your Name' star Timothee Chalamet, Indian Oscar winner A.R. Rahman of 'Slumdog Millionaire', and France’s Ariane Ascaride, fresh from her best actress award at Venice for 'Gloria Mundi'.

The southern port city was hit hard by Typhoon Mitag overnight Wednesday, with local media reporting a search was continuing for a family of four feared lost under rubble after landslides caused the collapse of a factory, restaurants and other buildings.

The government said nine people were killed across the country as of Thursday afternoon, and that more casualties were expected.

Festival organisers had cancelled a traditional public launch Wednesday -- citing safety concerns -- and delayed the setting up of outdoor facilities along the city’s main Haeundae beach as the typhoon was expected to bring strong wind and heavy rain.

But conditions cleared by mid-morning and workers were seen urgently preparing the Busan Cinema Centre for the opening night.

Ahead are 299 films from 85 countries, and VIP guests were joined Thursday by around 2,000 moviegoers for the world premiere of acclaimed Kazakhstani director Yerlan Nurmukhambetov's drama 'The Horse Thieves. Roads of Time', the festival opener co-directed by Japan’s Lisa Takeba.

Nurmukhambetov returns to Busan having previously had his debut feature 'Walnut Tree' win the main New Currents award in 2015.

He said that success was the "engine" that has run his career ever since.

"I was 40 at the time I won and the acknowledgement of this particular number of people gave me a feeling of deep relief and it brought opportunities," Nurmukhambetov revealed before Thursday’s screening.

Korean cinema is also celebrating its centenary in 2019 and there were huge cheers to greet the red carpet arrival of some local industry greats Thursday -- many who feature in the festival’s retrospectives and will meet with fans for Q&A sessions.

Those sharing the spotlight Thursday included director Im Kwon-taek, a veteran of 102 films and named best director at Cannes in 2002 for his sprawling drama 'Chihwaseon'.

Another is actress Kim Ji-mee, who chalked up around 700 films before calling it quits in the late 1990s. Kim was famed also for a string of romances that saw her dubbed Korea's Elizabeth Taylor by the local media.