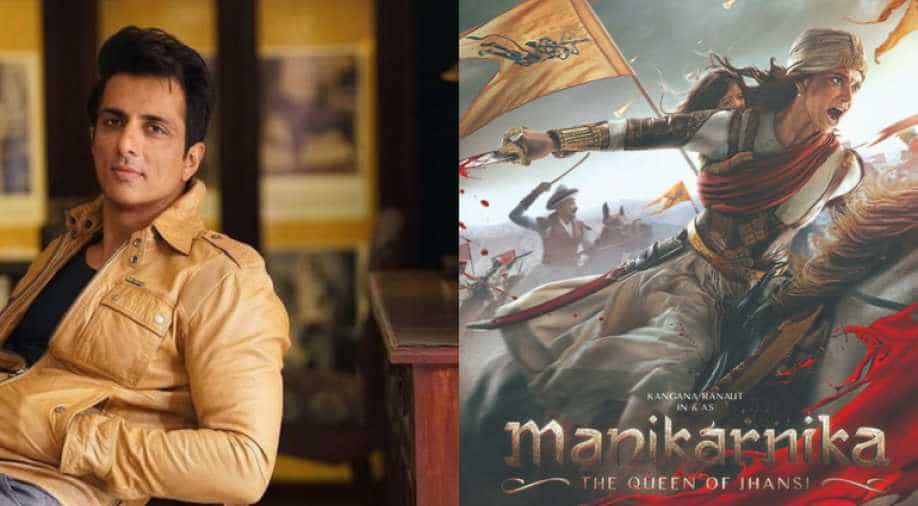 File image of Sonu Sood and a poster of 'Manikarnika: The Queen Of Jhansi'. (Image via Instagram) Photograph:( Instagram )

Kangana Ranaut's 'Manikarnika:The Queen Of Jhansi' has got into fresh troubles. Actor Sonu Sood, who was playing a prominent role in the film has decided to leave the project. The actor's spokesperson cited conflict in the schedule as the reason for his walk out.

According to the spokesperson, Sonu, who is filming Rohit Shetty's 'Simmba'&nbspright now, was recently asked to reshoot portions for 'Manikarnika' by Kangana.

The 45-year-old actor is sporting a beard for the Ranveer Singh-starrer, but for 'Manikarnika' he was asked to go clean shaven.

Sonu had asked the makers of the biopic to finish the reshoots after he completes his schedule for 'Simmba' but things did not work out and he decided to quit the project.

"Sonu has always been a thorough professional and honoured all his commitments. He had informed the makers of 'Manikarnika' about his dates and schedule well in advance. Inconveniencing the team of his current film to accommodate the demands of another are against his professional principles.

"Sonu has taken the higher road ahead and wishes the team of 'Manikarnika' all the best," the spokesperson said in a statement.

Interestingly, news of the film's director Krish Jagarlamudi leaving the project has also been doing the rounds. A photo surfaced on social media which showed the clapboard having Kangana's name as the director of the film. The photo went viral instantly.

However, it was later clarified by the National Award-winning actor's team that she was just shooting the patchwork in absence of Krish, who is currently busy fulfilling his commitments for another project.