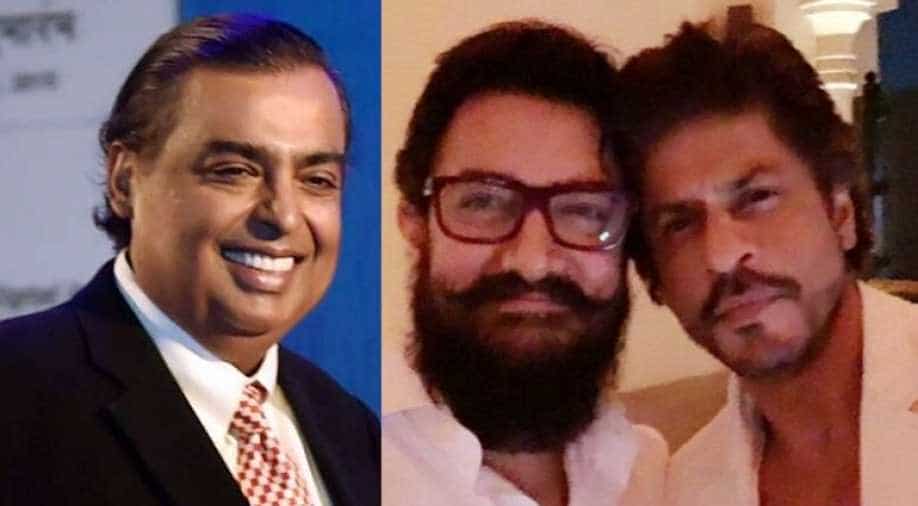 Other Indian celebrities who have made to the list include producers Aditya Chopra, Ekta Kapoor, Ronnie Screwala, and Siddharth Roy Kapur.

Reliance chairman Mukesh Ambani and superstars Shah Rukh Khan and Aamir Khan are among the 10 Indians who have featured in Variety magazine's annual list of '500 Most Important People.'

Other Indian celebrities who have made to the list include producers Aditya Chopra, Ekta Kapoor, Ronnie Screwala, and Siddharth Roy Kapur. Kishore Lulla, executive chairman of Eros International, and Uday Shankar, president of The Walt Disney Company, APAC also feature on the list.

SRK, who did not have any release in 2019, featured on the list for his past hits and his production house Red Chillies Entertainment which produced this year's blockbuster hit 'Badla' and web series 'Bard Of Blood'. The leading magazine described Khan as "one of Indian cinema`s great global romantic stars, winning most popular actor three times at the Central European Bollywood Awards".

"A thriving actor-producer, he co-produced `Zero`, in 2018 through his VFX house Red Chillies Entertainment, but it underwhelmed. Undeterred, Red Chillies hit big with thriller `Badla` in 2019, and the company has its eight-episode political espionage series `Bard of Blood` currently running on Netflix. Inducted into AMPAS in 2018, Khan has been making his mark for decades: His romance `Dilwale Dulhania Le Jayenge` has been playing nonstop for 24 years, and `Dil Se` was the first Indian film to break into the U.K. top 10. He also co-owns cricket teams Kolkata Knight Riders and Trinbago Knight Riders," the description added.

On Aamir Khan, Variety spoke about his hit films, calling him the "perfectionist".

"After decades as a hugely popular Bollywood actor-producer-director, the 2018 Khan starrer `Thugs of Hindostan` was a disappointment - but only by his own exalted standards. Budgeted at $32 million, the film grossed $54 million, including $9 million in China. By contrast, his 2016 "Dangal" was India`s all-time highest grosser, earning $310 million, $190 million of it from China. Khan is currently remaking the iconic `Forrest Gump` titled `Lal Singh Chaddha` for 2020. The admitted perfectionist burst out in 2001 when his `Lagaan: Once Upon a Time in India` was up for the foreign-language Oscar. Since then, his name has been attached to some of India`s biggest hits, including `PK`, `3 Idiots` and `Dhoom 3`. He was inducted into the Academy in 2017," read the write-up on Variety`s site.