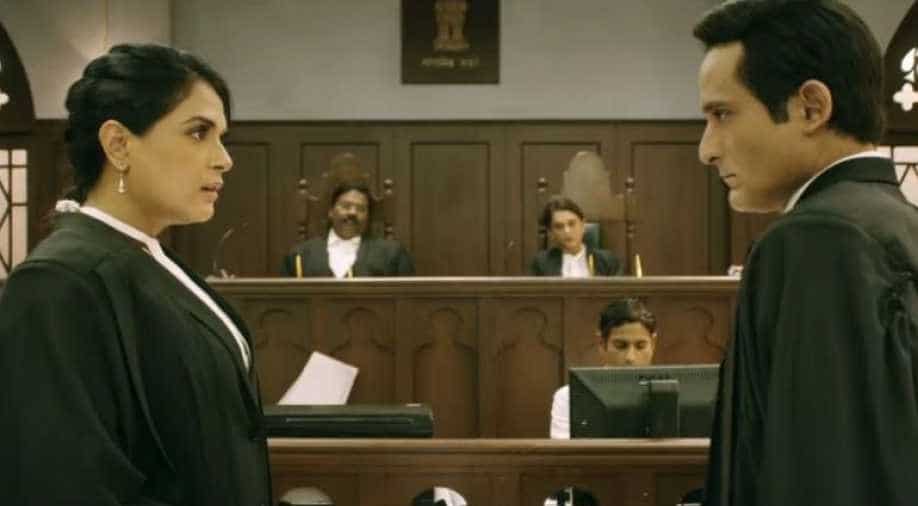 Richa Chadha and Akshaye Khanna in a still from 'Section 275'( Image via Youtube/T Series) Photograph:( Others )

Inspired by real-life cases, the film focuses on Section 375 of the Indian Penal Code which deals with rape

The teaser of Richa Chaddha and Akshaye Khanna starrer `Section 375` that explores the subject of rape in India is finally out.

Inspired by real-life cases, the film focuses on Section 375 of the Indian Penal Code which deals with rape. The teaser, shared by Richa on her social media accounts, begins with the actor and Akshaye presenting some shocking facts about rape and justice delivered in the cases.

"In this country a woman face rape every 20 minutes," Richa reveals. "Rape rate in India is 1.8 which means out of one lakh women 1.8 of them could face rape in their lifetime," Akshaye can be heard saying in the background.

While facts are revealed, visuals of the lead cast donning black coats appears on the screen."What is most worrying is the conviction rate is mere 25 per cent. And the country which ruled India for 200 years has the conviction rate of seven per cent," Akshaye contends.
"In 75 per cent cases, rape accused are not punished for various reasons. They just walk free!" says Richa.

Questioning Richa`s claim, Akshaye asks the judge if a man accused of rape can ever walk free.

It appears that Akshaye is defending a rape accused while Richa is appearing on behalf of a victim of rape.

The film went on floors on January 14 and is being bankrolled by Bhushan Kumar, Kishan Kumar, Kumar Mangat Pathak, and Abhishek Pathak.The film is scheduled to release on September 13.