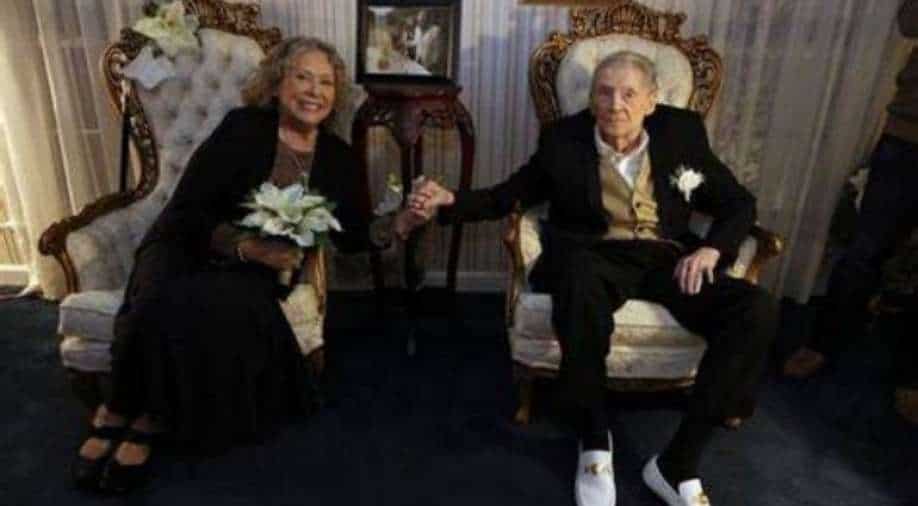 Lewis suffered a minor stroke in February 2019, but less than a year later recorded an album of gospel classics.

Rev. Donnie Swaggart, son of the late televangelist Jimmy Swaggart, who was Lewis` cousin, officiated on Tuesday. The couple held hands in the living room of Lewis Ranch, a tourist attraction where they live part-time in Nesbit, Mississippi.
"Killer, you may kiss your bride," Swaggart said, referring to the musician by his nickname.

About 100 guests were required to test negative for COVID-19 to attend the private party at the house, which is located less than 20 minutes` drive from Graceland, the home of fellow rock pioneer Elvis Presley.

The couple had been quarantined for months. Lewis, who usually throws a party for his birthday on Sept. 28, skipped celebrating his 85th because of the pandemic.

"2nd Covid Shot Over!!!!" Judith Coghlan Lewis said in a Feb. 22 Facebook post that included a photo of her smiling husband in a car.

Jerry Lee Lewis, who raised hell with 1950s hits such as "Great Balls of Fire," chatted briefly with guests before retiring to a private area in the house.

The menu featured a three-tiered white wedding cake topped with figures of an embracing couple. White flowers cascaded from their feet over layers circled with white beads.

Lewis` string of marriages began when he was 16, with Dorothy Barton, a preacher`s daughter. His third marriage, to his 13-year-old cousin Myra Gale Brown, caused a scandal that abruptly ended his British tour after her age was revealed.

Lewis is the only surviving member of the dazzling Sun Records talent pool in Memphis, Tennessee, that included Presley, Johnny Cash, Carl Perkins and Roy Orbison. He was one of the first performers inducted into the Rock `n` Roll Hall of Fame in 1986.

Lewis suffered a minor stroke in February 2019, but less than a year later recorded an album of gospel classics.