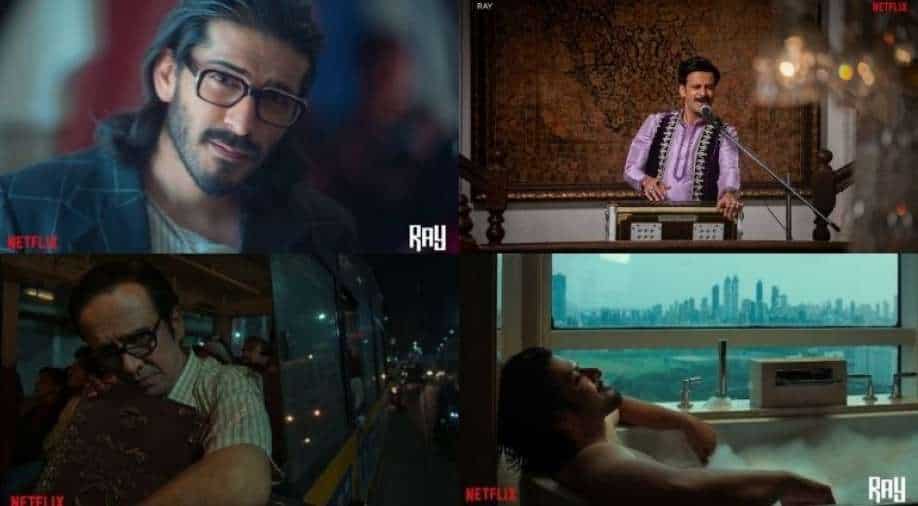 The year 2021 marks as the centenary year of maestro Satyajit Ray. And Netflix is providing a perfect tribute to the filmmaker.

The year 2021 marks as the centenary year of maestro Satyajit Ray. And Netflix is providing a perfect tribute to the filmmaker. The trailer of 'Ray' an anthology based on stories by the late maestro was released on Tuesday and it narrates four intriguing tales.

The stories are titled 'Hungama Hai Kyon Barpa', 'Forget Me Not', 'Bahrupiya' and 'Spotlight'. Two of the stories are directed by Srijit Mukherji, while Abhishek Chaubey and Vasan Bala helm one each.

Talking about his segment 'Hungama Hai Kyon Barpa' which features Manoh Bajpayee and Gajraj Rao in the lead, Abhishek Chaubey said, "I`m drawn to stories that twist with whimsy and humour. Hardly anyone crafts those better than Satyajit Ray and a chance to tell this story is a great opportunity for me. With Manoj Bajpayee and Gajraj Rao playing off each other on screen, 'Hungama Hai Kyon Barpa', I hope is as much of a joy to watch as it was to make. Super stoked about the show and can`t wait for people to watch it!"

Srijit Mukherji who has in the recent past directed 'Feluda Pherot' based on Ray`s Feluda adventures in Bangla directs two parts in the anthology- 'Forget Me Not' and 'Bahrupiya'.

One legendary storyteller, a magical cast and an admin who just cannot keep calm!
Sorry for screaming but THE TRAILER FOR RAY IS HERE! 😮😮😮

"Satyajit Ray has been a big inspiration in my life. After faithfully bringing two stories of Ray to life in 'Feluda Pherot', it is an honour and fulfilling to reinterpret two more stories of Ray in a decidedly darker space," said Mukherji, adding that he got the opportunity to work with a brilliant cast including Kay Kay Menon, Sweta Basu Prasad and Ali Fazal.

Vasan Bala directs 'Spotlight'. "It`s an opportunity that led me to collaborate with wonderful talent. It`s a pulpy, quirky, music-filled tale of very interesting characters. Harshvarrdhan Kapoor, Radhika Madan, Akanksha Ranjan Kapoor and Chandan Roy Sanyal are in crackling form. Can`t wait for the audience to watch and react to it," he said about the Netflix show.

'Ray' will premiere on Netflix on June 25.