Priyanka Chopra, Nick Jonas to get married before Sophie Turner and Joe Jonas 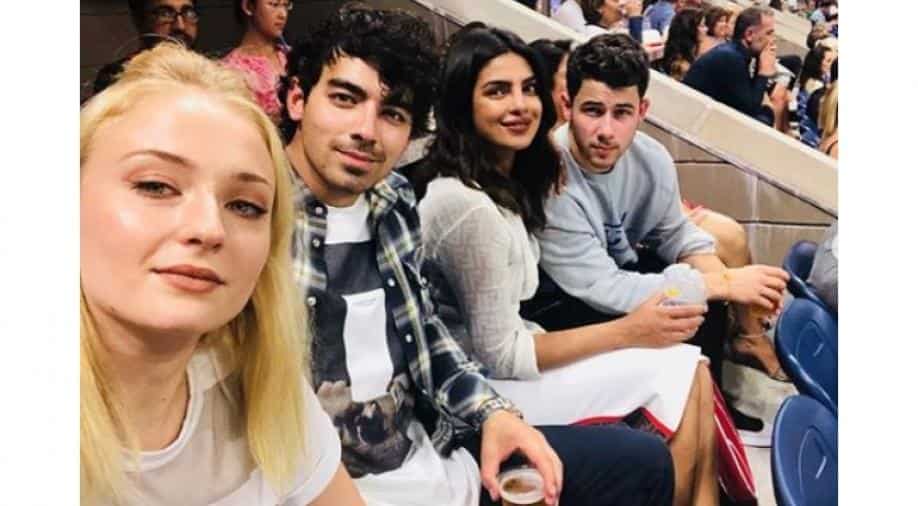 File image of Joe Jonas and Sophie Turner with Priyanka Chopra at US Open Photograph:( Instagram )

Sophie Turner and Joe Jonas may have gotten engaged in 2017, but Jonas Family is gearing up for Priyanka Chopra and Nick Jonas' wedding. 'Game Of Thrones'star Turner revealed that the couple is planning to tie the knot soon and want to start a family soon after.

“The wedding is coming soon and they really want to blend wedding traditions from both of their cultures that are important to them. Priyanka is having a really good time planning the wedding because it’s a mix of Indian and American styles and customs, which she knows so much about,” an insider told US Weekly magazine. “Nick and Priyanka can’t wait to get married. They have amazing chemistry and can’t wait to have kids,” a source shared.

The source revealed the Sophie Turner is completely fine with the idea of Nick and Priyanka getting married before her and her fiance. Turner has welcomed Priyanka to the Jonas family and the two have been going on double dates as well with their respective beaus.

"She thinks it’s incredibly sweet and romantic that Priyanka and Nick want to do things the traditional way and get married before they start trying for a baby. Sophie and Joe both get that the clock is ticking for Priyanka and Nick and they are being incredibly supportive,” a source told Hollywood Life.

The singer wore a grey suit with a black shirt, while the 'Game of Thrones' actress rocked thigh-high black boots, a grey skirt and a black shirt that tied at the waist.

The romance continued inside the event, where Turner posted a cuddly Instagram. In the picture, Joe put his arm around Sophie as she leaned into him affectionately and closed her eyes.

"With my love in Paris," she captioned the snapshot.

With my love in Paris ♥️

Priyanka and Nick have just got back to Mumbai from a short trip to Jodhpur where rumours had it the couple had gone to scout for a wedding location. Priyanka though later cleared the air as she posted photos of a birthday celebration that the couple was part of in Jodhpur.