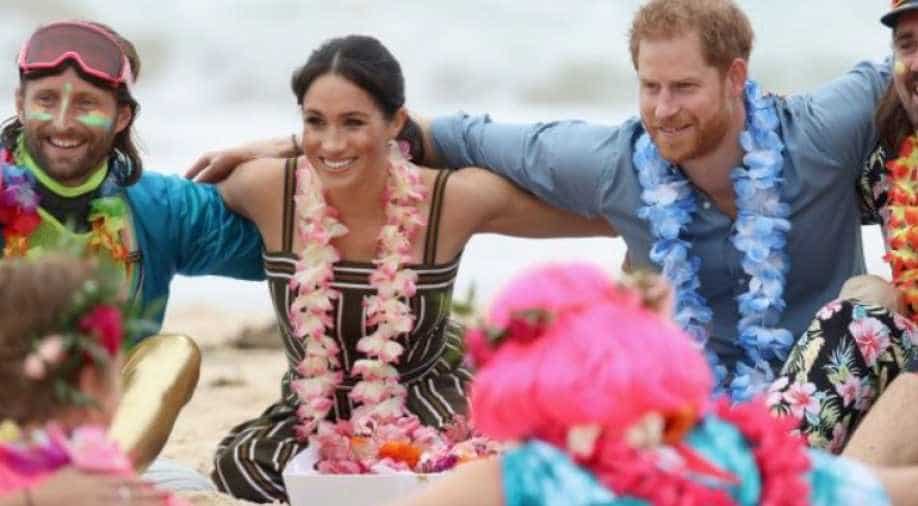 Harry and Meghan kicked off their shoes to sit with members of community group OneWave, which tackles mental health issues using 'saltwater therapy, surfing and fluro '.

Britain's Prince Harry and his wife Meghan joined in a group hug at a "Fluro Friday" event on Australia`s Bondi Beach organised by surfers to raise awareness of mental health issues.

Harry, who has said he sought counselling in his late twenties to deal with the grief of losing his mother Diana, served in British Army and campaigns to provide mental health help for soldiers who need it.

Fluro, short for fluorescent, refers to the brightly-coloured shirts and flower garlands that members of the surfing group wear.

After listening to speakers in the circle for a few minutes, Harry, wearing a garland of blue flowers around his neck, and Meghan, one of pink, joined in the group hug.

''Each and every one of us will experience poor mental health at some stage in our lives," Charlotte Connell, who was in the circle, told the Australian Associated Press.

The couple occasionally clasped hands during the circle event, and later posed with a surfboard.

Harry served in the British Army for 10 years, including two stints in Afghanistan, and now works with several charities, including supporting wounded soldiers.

Along with his brother Prince William and his wife Catherine, Harry also set up a mental health charity.

Prince Harry and Meghan are on their first international tour since marrying in May. It will also take them to New Zealand and the South Pacific islands of Fiji and Tonga.

After the event, the couple strolled along Bondi Beach, shaking hands and posing for photographs with some of the thousands of people who turned out for the Royals, snapping pictures and video with their smartphones.

Crowds have thronged for a glimpse of the couple, who are expecting their first child in the northern spring. The child will be seventh in line to the British throne.

The trip coincides with the Invictus Games to be held in Sydney from Saturday until Oct. 27. The games, founded by Harry, are an international paralympic-style event for military personnel wounded in action.