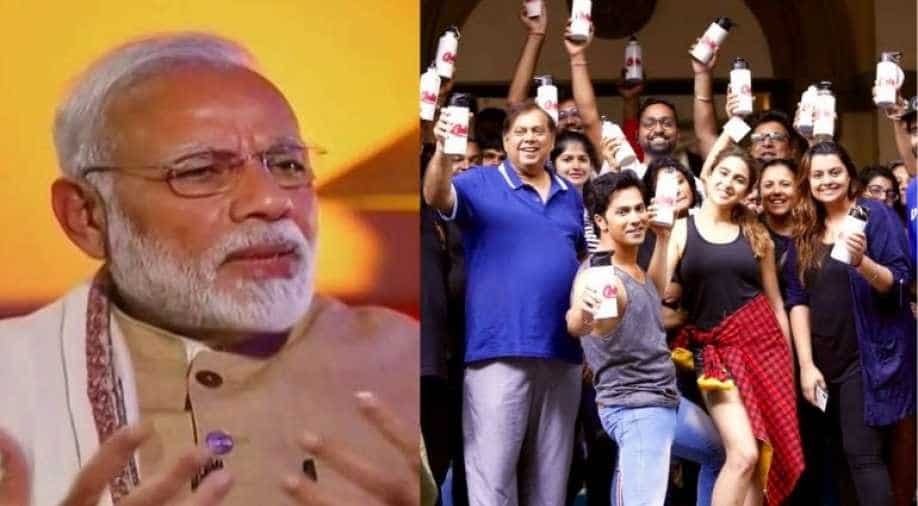 During 'Mann Ki Baat', the Prime Minister had pitched for launching a "new mass movement" against single-use plastic from October 2, the birth anniversary of Mahatma Gandhi.

Prime Minister Narendra Modi on Thursday lauded the team of the upcoming Bollywood film  'Coolie No.1', starring Varun Dhawan and Sara Ali Khan, for their "superb gesture", contributing to the movement to eliminate the usage of single-use plastic in the country.

Superb gesture by the team of #CoolieNo1! Happy to see the film world contributing towards freeing India from single use plastic. https://t.co/bPXFgHz2I4

The picture-perfect still features Varun taking the centre space with his co-star Sara while his father David Dhawan can be seen standing beside him. The 'Badlapur' actor shared the picture of the crew posing with their sippers on his Twitter handle on September 1.

Sharing the image, the 'Student of the Year' debutant hailed the initiative taken by the Prime Minister and wrote, "Being a plastic-free nation is the need of the hour and great initiative taken by our prime minister and we can all do this by making small changes. "He added, "The sets of #CoolieNo1 will now only use steel bottles."The announcement of banning single-use plastic was made by PM Modi during his monthly radio address 'Mann Ki Baat'.

During 'Mann Ki Baat', the Prime Minister had pitched for launching a "new mass movement" against single-use plastic from October 2, the birth anniversary of Mahatma Gandhi.

He also spoke about the initiative during the Independence Day address, urging people to join the movement. This isn't the first time that a Bollywood actor has made an effort to garner people's attention towards environmental issues. In June, Salman Khan gave a subtle yet impactful message on single-use plastic. The actor posted a video where he can be seen offering water to a monkey, whom he calls his 'Bajrangi Bhaijaan', in a plastic bottle. However, the monkey refuses.

The actor then offers water in a glass and 'Bajrangi Bhaijaan' quickly accepts it. While the video was shared on a lighter note, hidden in it is a message to stop using plastic bottles. Bollywood celebrities often participate in a campaign for parties and social causes in order to spread awareness.

Coming from public figures and celebrities, the influence is undoubtedly going to be substantial. The original film 'Coolie No.1' which starred Govinda and Karisma Kapoor in the lead, was directed by Varun's father and filmmaker David Dhawan.

David will also direct the upcoming film, which will be produced by Vashu Bhagnani, who also bankrolled the 1995 classic. This will be the third collaboration between David and Varun after the 2014 movie 'Main Tera Hero' and the 2017 hit film 'Judwaa 2'.

Varun is teaming up with Sara for the first time in the 'Coolie No.1'' remake. The film will hit the screens on May 1, next year. Other than Varun and Sara, the film also stars Paresh Rawal, Rajpal Yadav, Johnny Lever and Jaaved Jaaferi in pivotal roles.