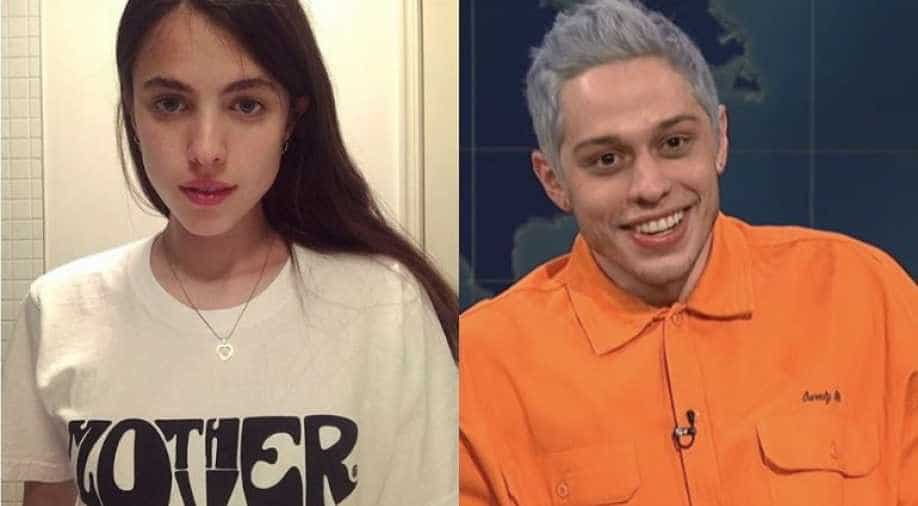 Shortly after rumours of actor-comedian Pete Davidson dating `Once Upon A Time In Hollywood` fame Margaret Qualley surfaced, the two were seen getting cozy and spending some quality time together in Venice, Italy.

Shortly after rumours of actor-comedian Pete Davidson dating `Once Upon A Time In Hollywood` fame Margaret Qualley surfaced, the two were seen getting cozy and spending some quality time together in Venice, Italy.The pair linked arms and held hands as they strolled around the streets of the Veneto capital on Monday, reported Us Weekly.

The 25-year-old actor kept it casual in a white, vintage Notorious B.I.G T-shirt and purple basketball shorts. He rounded off his look with a black baseball cap, sunglasses, and white sneakers.

Meanwhile, Qualley looked pretty in a beige tank dress.The outing came one day after the duo was spotted leaving their hotel together.

The pair took a boat ride as part of a romantic date. Davidson looked dapper in a navy polo shirt and black pants and Qualley wore a black tuxedo dress.Later in the evening, the two were photographed laughing on the boat as the actor brushed her teeth with a disposable toothbrush
.
News of Davidson and Qualley`s romance broke on August 28."They`ve been seeing each other for a couple of months and Margaret is really excited about him," a source revealed to Us Weekly.

The couple touched down at Marco Polo Airport in Venice on August 29.An eyewitness told the outlet, "Pete and Margaret were standing and chatting and laughing.There wasn`t much PDA, but he was in a good mood and the two of them were joking around.

Margaret walked to the other side of baggage claim to get her bag and Pete was waiting with an older lady.Pete was super nice and posed for a photo."The next day, Davidson supported his lady love at the Venice Film Festival premiere of her new movie 'Seberg'

Davidson previously dated Cazzie David, Ariana Grande, to whom he was engaged for four months in 2018, and Kate Beckinsale. Meanwhile, Qualley was once linked to Nat Wolff and Cary Fukunaga.

The two were initially spotted flirting at a Golden Globes after-party in January and the relationship "ran its course" by April, a source told E! News at the time.

On the work front, Davidson will be back for the 45th season of `Saturday Night Live`, premiering on September 28. He recently lent his voice for the upcoming 'The Angry Birds Movie 2'.

He has three films in the pipeline  'The Jesus Rolls','Marmaduke' and an untitled semi-autobiographical comedy, directed by Judd Apatow.Meanwhile, Qualley, rose to fame playing Justin Theroux`s daughter in HBO's,The Leftovers` and was most recently seen in `Once Upon A Time In Hollywood', co-starring Brad Pitt, Leonardo DiCaprio, and Margot Robbie.