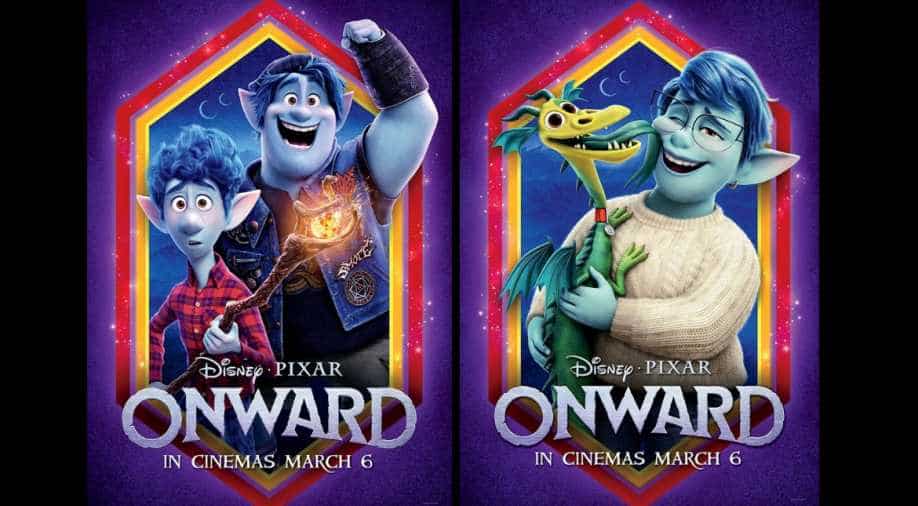 Disney and Pixar`s 'Onward' debuted this weekend to $40 million, enough to lead box office charts but still a somewhat disappointing start given the studio`s near-flawless track record when it comes to animated fare.

Disney and Pixar`s 'Onward' debuted this weekend to $40 million, enough to lead box office charts but still a somewhat disappointing start given the studio`s near-flawless track record when it comes to animated fare. Internationally, the film brought in $28 million for a global tally of $68 million.

'Onward,' a fantastical adventure about two brothers (voiced by Tom Holland and Chris Pratt), ranks among Pixar`s lowest opening weekend`s in modern times, joining 2015`s 'The Good Dinosaur' and it's $39 million as a rare blemish for the Disney-owned company, known for producing hits such as 'Inside Out',' Coco' and 'Up.' Pixar films typically cost $175 million to $200 million to produce, a huge sum that doesn`t include global marketing fees.

Directed by Dan Scanlon, 'Onward' received mostly positive reviews, though it didn`t welcome the kind of rapturous reception that greets most Pixar titles. Still, 'Onward' looks to benefit in coming weeks as one of the few options for family audiences. It scored an "A-" CinemaScore, signalling that moviegoers enjoyed the film.

"Pixar has earned an incredible reputation for delivering quality to audiences, and based on their response, they are being touched by it," said Cathleen Taff, Disney`s president of global distribution. "We`re excited to see such good word-of-mouth. That bodes well for the life of its run in theaters."

This weekend`s other high-profile release, Warner Bros.` sports drama 'The Way Back,' also fell short of expectations. But box office experts suggest it was the movies themselves -- not fears of coronavirus -- that stifled ticket sales. 'Onward' was tracking an opening between $40 million and $45 million even before threats of coronavirus in North America.

"I think there was zero impact," Paul Dergarabedian, a senior media analyst with Comscore, said. "With $40 million for `Onward,` a small drop off for `The Invisible Man` and `The Way Back` getting solid scores from audiences, it looks like people are in the habit of going to the movies."

Overall box office receipts are down 50% from the same weekend last year, an inevitable dip given last year saw "Captain Marvel" arrive with a huge $153 million. That drastic dip pushed the year-to-date box office down almost 2%, the first year-over-year decline in 2020.

'The Way Back' brought in $8.5 million when it launched in 2,718 theaters, enough for third place on box office charts. It`s a lackluster start given its A-list leading man, but an improvement from Warner Bros. recent mid-budget duds like 'The Good Liar' ($5.6 million) and 'The Kitchen' ($5.5 million).

The film, which cost roughly $21 million to make, was poised as a big-screen comeback for Affleck. His performance as an alcoholic construction worker who is recruited to become the head coach of a high school basketball team has been praised, but it didn`t get the level of reception that smaller dramas need these days to make an impact at the box office. Among opening weekend crowds, 64% were over the age of 35. Jeff Goldstein, Warner Bros.` president of domestic distribution, noted it`s a demographic that doesn`t usually rush out on opening weekend.

In the second place, Universal and Blumhouse`s 'The Invisible Man' added $15.5 million in its second outing for a cumulative total of $52.6 million. Internationally, the Elisabeth Moss-led thriller generated $17.3 million. Its box office receipts currently stand at $98.3 million, already a win for the studio since it cost just $7 million.

Paramount`s 'Sonic the Hedgehog' landed at No. 4, bringing in another $8 million. After four weeks in theaters, the animated family film has made an impressive $140 million. The blue speed demon, voiced by Ben Schwartz, has also been a draw overseas, where it has made $154 million. Globally, 'Sonic' is nearing the $300 million mark with ticket sales currently at $295.6 million.

Disney`s 'The Call of the Wild' rounded out the top five, pocketing $7 million in its third frame. The adaptation of Jack London`s novel, starring Harrison Ford and a CGI dog named Buck, has generated $57.5 million in North America and $99.6 million worldwide, a weak result because the film cost a head-scratching $125 million to make. Given the high price tag, sources estimate "The Call of the Wild" needs to earn between $250 million and $275 million to get out of the red. At this point, it will be difficult to reach those heights so "The Call of the Wild" is expected to lose around $50 million.

Among indie releases, A24`s 'First Cow' made $96,059 when it opened in four venues -- translating to $24,015 from each location. Directed by Kelly Reichardt, the film is set in the Pacific Northwest and follows a 19th-century cook who travels with fur trappers to the Oregon Territory. It will continue its platform release next weekend before opening nationwide in the spring.

Sony Pictures Classic`s 'Burnt Orange Heresy' had a rocky start in limited release, bringing in $18,296 from four screens for a theatre-average of $4,574. The heist thriller stars Claes Bang, Elizabeth Debicki and Mick Jagger.

Elsewhere, Focus Features` 'Emma' amassed $5 million when it expanded to 1,565 theaters, bringing its domestic tally to $6.8 million. The adaptation of Jane Austen`s novel also earned $1.5 million this weekend at the international box office for a global bounty of $20.9 million.