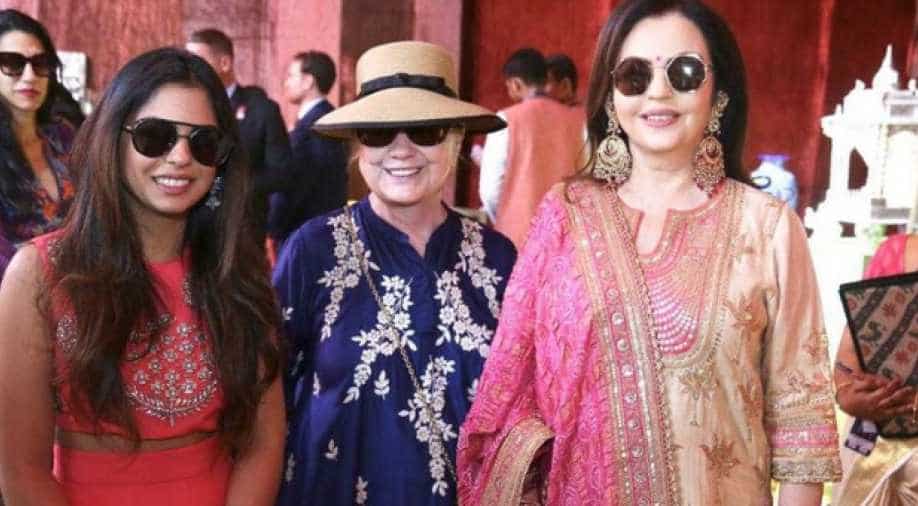 The bride-to-be Isha Ambani along with her mother Nita Ambani and Hillary Clinton visited Swadesh Bazaar, an initiative of Reliance Foundation celebrating 108 traditional crafts and art forms of India.

The Swadesh Bazaar had a special visitor today and its none other than former US first lady Hillary Clinton.

The bride-to-be Isha Ambani along with her mother Nita Ambani and Hillary Clinton visited Swadesh Bazaar, an initiative of Reliance Foundation celebrating 108 traditional crafts and art forms of India.

The bazaar showcased 108 traditional Indian crafts and art forms that were on display for the national and international guests attending the pre-wedding functions.

The bazaar is a unique concept initiated to encourage the craftsmanship of traditional Indian artisans, especially for a lot of indigenous crafts that need conservation and revival.

Showcasing their art forms were craftsmen who are keeping these traditional crafts alive. Artisan families, craftsmen and craftswomen displayed their indigenous technique and products of weaving like Jamdani from West Bengal, Patola from Gujarat, Pashmina Kani from Kashmir, Kota Weaving, Chanderi weaving and Maheshwari from Madhya Pradesh, Mekhla Chador of Assam among various others. Some very beautiful and intricate hand embroidery by several artists was also displayed.

From the world-renowned Kanjeevaram, Chkankari, Bandhej and Leheriya, there were exhibits of the popular printed fabrics of Bagru Dabu, Bagh, Kalamkari and Ajrak as well.

Swadesh Bazaar highlighted the beauty of traditional Indian crafts. It seeks to become a unique exhibit that not just provides livelihoods to thousands of artisans, but also gives them an opportunity to showcase rare works from every corner of India.

Clinton arrived on Saturday in Udaipur to attend Isha Ambani and Anand Piramal`s wedding. The two are all set to tie the knot on December 12.

The dreamy wedding destination wedding will be attended by all the A-listers of Bollywood including Karan Johar, Varun Dhawan, Aamir Khan, Priyanka Chopra among others. The `Queen` Beyonce was also snapped at the Maharana Pratap Airport today. The singer is here to grace the grand Ambani-Piramal wedding functions.

The Ambani and Piramal families will host their friends and family in Udaipur where they are partnering with artisans and craftsmen to integrate local culture and traditions into the festivities.

Earlier, the Ambani family hosted a three-day extravaganza in the picturesque Lake Como in Italy, which was attended by the who`s who of B-town.

Anand, son of Swati and Ajay Piramal, is the founder of Piramal Realty, a leading real estate firm in India.