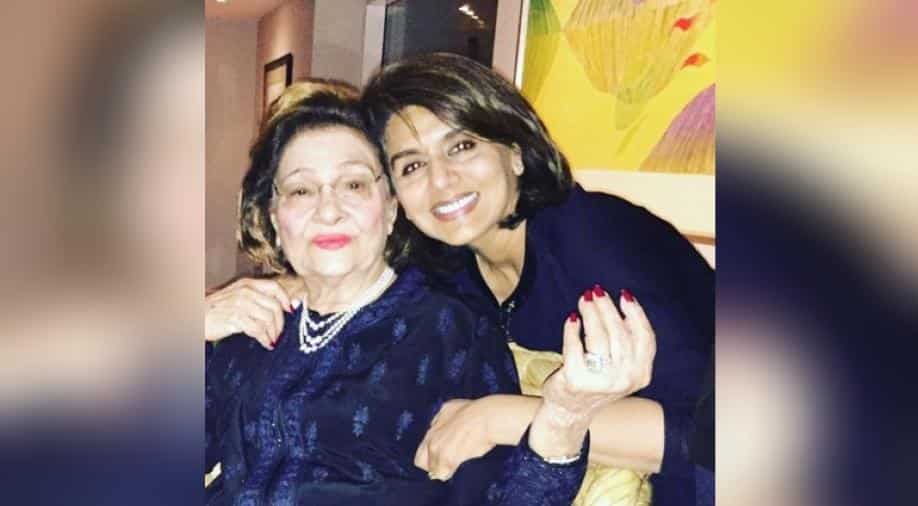 Neetu Kapoor posted this image of her and her mother-in-law Krishna Raj Kapoor on Instagram. Photograph:( Instagram )

Bollywood actor Neetu Kapoor on Tuesday posted a heartfelt post for her late mother-in-law, Krishna Raj Kapoor, who passed away on Monday.

Neetu posted an adorable picture on Instagram, where both of them can be seen smiling. The post was captioned "She was such a huge influence in my life admired her elegance Wit Generosity Warmth !!! She will always stay in my heart"

Most of the Bollywood celebrities were present at the funeral including Amitabh Bachchan, Abhishek Bachchan, Aamir Khan, Aishwarya Rai Bachchan, Arjun Kapoor, Farhan Akhtar, Kareena Kapoor, and Saif Ali Khan. However, Krishna`s son Rishi Kapoor, Neetu and their son, Ranbir, were not present in the funeral procession held yesterday owing to Rishi`s medical treatment in the US.

Meanwhile, Alia Bhatt, along with Karan Johar, was in attendance in order to make up for Alia`s rumoured beau Ranbir`s absence. The actress was seen face timing her beau during the funeral ceremony so that he could be a part of the ceremony from the US.

Raj Kapoor married Krishna Malhotra in May 1946, a match arranged by their families. The couple has five children including three sons- actors Randhir, Rishi, and Rajiv, and two daughters, Ritu Nanda and Rima Jain.