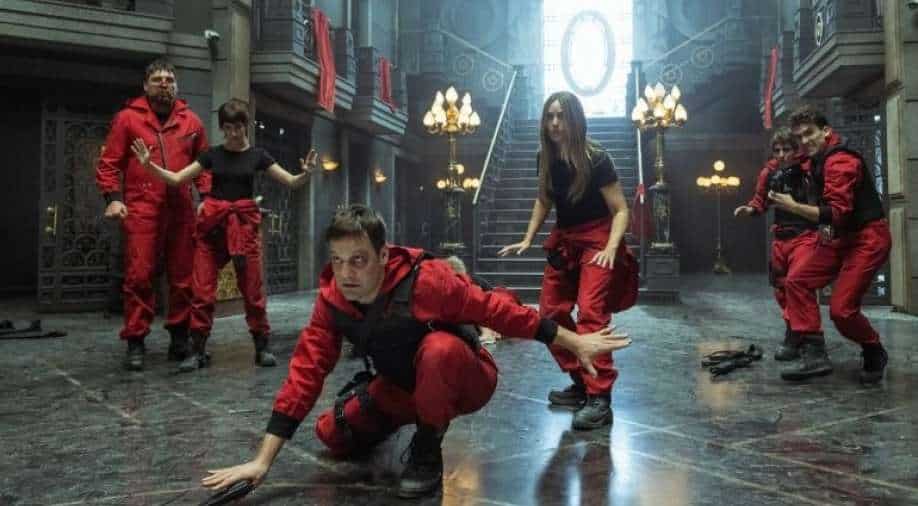 The CEO has declared holiday for staff to let them watch 'Money Heist'. Photograph:(Twitter)
Follow Us

The first look images were shared on the show`s official Instagram page.The images reveal the chaos both inside and outside of the Bank of Spain; with the Professor (Alvaro Morte) caught off guard after Sierra (Najwa Nimri) finds his hideout and with Lisbon (Itziar Ituno) now safely inside the bank.

The gang must bring out its toughest side to survive, fuelled by anguish, more weapons and the desperation of not having a plan.`Money Heist` is Netflix`s most successful Spanish series to date, and was its top non-English-language foray until the French series `Lupin` debuted in December, reported Variety.

The series focuses on a group of misfit con artists and robbers who convene under the guidance of "the Professor" to rob major banks in Spain. The series originated on Spanish network Antena 3 to lukewarm ratings before Netflix breathed new life into the program, transforming it into the biggest show to ever emerge from the Spanish market.

Prepare for the final battle

The streamer had in July last year given the go-ahead to the upcoming season of `Money Heist`. The fifth season will mark the end of the gang`s ongoing robbery at the Bank of Spain. Created by Alex Pina and produced by Vancouver Media, the Spanish series became an instant hit on Netflix when it released.

Part Five also sees the addition of Miguel Angel Silvestre and Spanish Academy Award-nominee Patrick Criado.The final part of `Money Heist` will be divided into two volumes, to be released on September 3 and December 3.