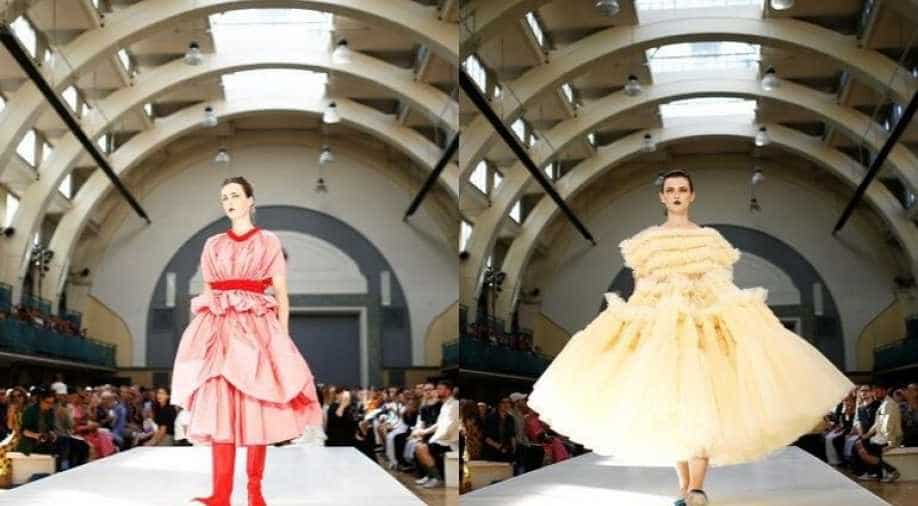 Goddard, whose dresses have been worn by singer Rihanna and featured in the hit television show 'Killing Eve', kicked off her catwalk show with a long-sleeved cropped white top worn with a voluminous ruffled cream tulle skirt.

Goddard, whose dresses have been worn by singer Rihanna and featured in the hit television show 'Killing Eve', kicked off her catwalk show with a long-sleeved cropped white top worn with a voluminous ruffled cream tulle skirt.

Models wore a range of tulle dresses and skirts in cream, black, bright blue and coral that were ruffled, layered or deconstructed. Goddard also scrunched colourful open-collar smock and taffeta frocks and used puffy floral dresses to play with volume.

"I have spent the last six months exploring ways of creating volume through pattern cutting and manipulation so that each garment holds its own shape with no hidden support," Goddard said in show notes. "The idea of pieces holding their own shape has a directness that has come to inform everything about this show."

The spring/summer 2020 line also had dabs of denim that came in the shape of a V-neck jacket with puffed-up sleeves and a long dress with floral decorations.
Goddard put bows on her knitwear - on sleeves of jumpers and at the front of a cardigan.

Footwear consisted of colourful flat boots in black, red and sky blue as well as slip-on peep-toe sandals in similar colours, sometimes in shiny versions.
Also on Saturday, British model Naomi Campbell led a catwalk show for her charitable Fashion for a Relief organisation, which she founded in 2005 and said this year was raising funds for children's education and skill development causes.

During the show, held at the British Museum, models strutted in an array of colourful and quirky outfits from a mix of designers that included floor-length gowns, such as one sequined dress with feathered sleeves worn by Campbell.

There were also deconstructed jackets and plenty of prints, including one top depicting a portrait of Campbell's fellow 1990s supermodel Kate Moss.