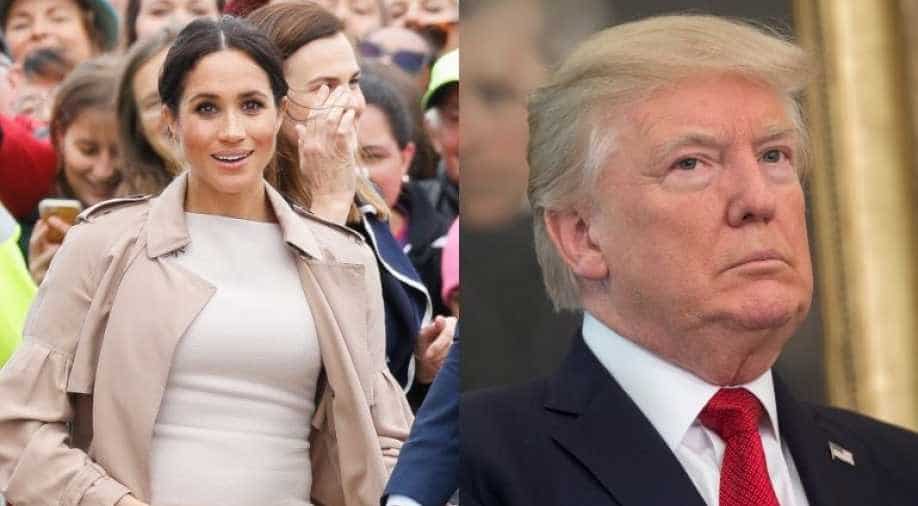 Before joining the royal family, Markle, a proud feminist, had made her stance on Trump clear during the US presidential elections in 2016.

Meghan Markle, the Duchess of Sussex has opted out of the British royal family`s meeting with United States President Donald Trump and First Lady Melania Trump, who are scheduled to visit the United Kingdom in early June.

Queen Elizabeth II will be hosting Trump and his wife on their three-day visit in June. This will be the first official state visit of the US president to the UK.
In the capital, Harry is scheduled to have a private lunch with the US president and William and Kate will have tea with Trump on his second day in the country.William and Kate will also join Prince Charles, Duchess Camilla, and Trump for a welcome ceremony at Buckingham Palace.

Markle definitely won`t make an appearance at any of these events, media reports state.

During all these engagements, Meghan, who just gave birth a couple of weeks ago, will likely be hanging out at Frogmore Cottage with her newborn son, Archie enjoying the peace and privacy of her maternity leave.

However, the Duchess has not made any statement about it so far, and she probably isn`t upset about missing this because she`s definitely not a Trump fan.
According to reports, before joining the royal family, Markle, a proud feminist, had made her stance on Trump clear during the US presidential elections in 2016.

Describing Trump`s politics as "misogynistic" and "divisive", Markle also spoke of her support for his presidential opponent at the time, Hillary Clinton.
Appearing on The Nightly Show with Larry Wilmore three years ago, Meghan said, "It`s really the moment I go; we film Suits in Toronto and I might just stay in Canada... Trump is divisive, think about female voters alone, right?"

"I think it was in 2012, the Republican Party lost the female vote by 12 points; that is a huge number and with as misogynistic as Trump is, and so vocal about it...Trump has made it easy to see that you don`t really want that kind of world that he`s painting," she added.