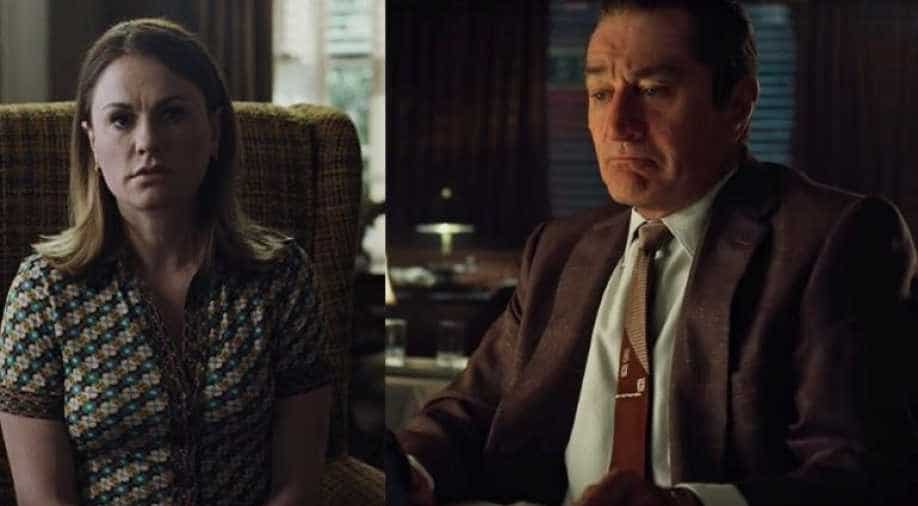 Anna Paquin and Robert De Niro in stills from 'The Irishman' Photograph:( Twitter )

`The Irishman` faced flak by critics claiming the lead female character in the movie played by Anna Paquin speaks just six words in 10 minutes of screentime.

While the ace filmmaker Martin Scorsese is known for crafting iconic films, the latest release `The Irishman` faced flak by critics claiming the lead female character in the movie played by Anna Paquin speaks just six words in 10 minutes of screentime.

The Oscar-winning actress plays Peggy Sheeran, the daughter of Frank Sheeran, a character played by Robert De Niro. Throughout her life, she suspects her father of being a morally corrupt person, particularly after he attacks a man, who evidently shoved Peggy in a grocery store, right in front of her.

Despite her presence in the film, however, she rarely speaks. She is mostly seen staring Frank in silence. Considering the capability of `The Piano` actor, some have questioned why a talented actress would be so underutilized, reported Variety.

The 76-year-old actor, however, has defended Scorsese and screenwriter Steven Zaillian`s choice to minimize her words."She was very powerful and that`s what it was," De Niro told USA Today. Also read: Why Martin Scorses never thought of making 'The Irishman' into a TV series

"Maybe in other scenes, there could`ve been some interaction between Frank and her possibly, but that`s how it was done. She`s terrific and it resonates."

Paquin herself defended the role and took to her twitter handle earlier this month, agreeing with a user who scoffed at the idea that Scorsese ordered Paquin to appear in the film.

"Nope, nobody was doing any `ordering,`" she wrote. "I auditioned for the privilege of joining the incredible cast of `The Irishman` and I`m incredibly proud to get to be a part of this film."

'Only a miracle can save Raju Srivastava, Doctors have given up': Ahsaan Qureshi