Margaret Atwood wins her second Booker Prize; 5 novels by the author that you must read 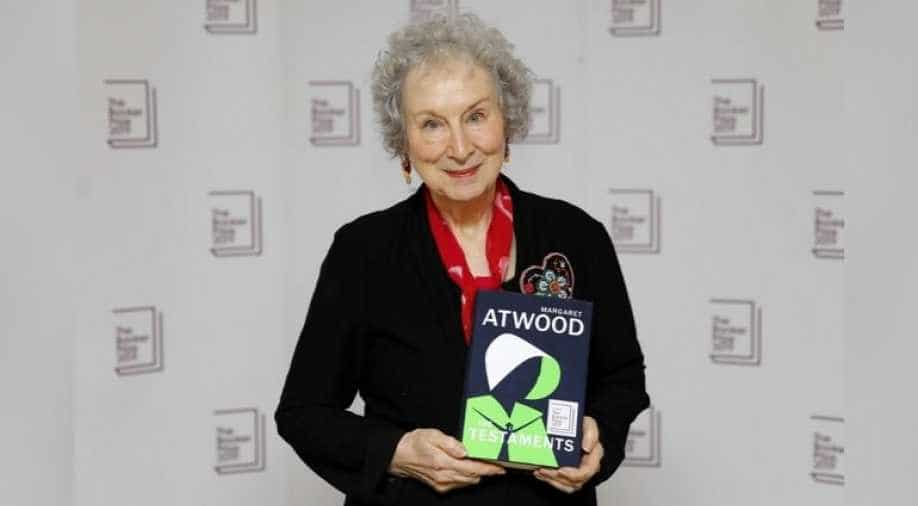 File image of Canadian author Margaret Atwood poses with her book 'The Testaments' during the photo call for the authors shortlisted for the 2019 Booker Prize for Fiction at Southbank Centre in London Photograph:( AFP )

She may be 79 now, but Atwood's work remains relevant even now. Here's a look at five of her best works.

As renowned Canadian author, Margaret Atwood went on the stage to receive her second Booker Prize, most were not surprised by her win. The legendary writer has for decades captured the imagination of readers worldwide with her distinct voice and writing. Her work has always been ahead of its time, which makes Atwood in a league of her own.

Atwood becomes only the second female author to win the award twice, sharing the $62,800 prize at the 50th-anniversary ceremony at London's Guildhall.

As she went up on stage to pick up her award with fellow winner Bernardine Evaristo, the popular author said, "I'm very surprised, I would have thought I would have been too elderly."

She may be 79 now, but Atwood's work remains relevant even now. Here's a look at five of her best works.

Atwood's most famous novel, revived more than three decades after its release with an award-winning television series, takes place in the chilling dystopia of Gilead, a patriarchal state in which women have no rights.

By turns witty and horrifying, the story follows a handmaid called Offred, one Gilead's few remaining fertile women who are forced into sexual servitude in a desperate attempt to repopulate the climate-ravaged world.

Atwood said she drew on real world events for her disturbing tale. "It’s not me who made this stuff up. The human race made it up, unfortunately," she told The Hollywood Reporter in 2019.

The story in particular struck a chord with the #MeToo movement and groups opposed to US President Donald Trump, protesters adorning the austere hooded outfits imposed on the handmaids as symbols of female subordination.

This tome of historical fiction tells the story of real-life Grace Marks, an Irish-Canadian maid who was imprisoned for a brutal double murder in 1843.

It evokes all the murky ambiguity surrounding the case in which Marks was pardoned after serving nearly three decades of a life sentence for the killing of her employer and his pregnant housekeeper.

"Arguably, the book's great strength lies in its elegant and evocative descriptions of the domestic activities that once commanded the full attention of women from the less privileged classes," a 1996 review in The New York Times said.

In 2017 it was adapted into a Netflix mini-series with a screenplay by Canadian Oscar-nominated director Sarah Polley.

This novel, for which Atwood won Britain's prestigious Booker Prize, mixes gothic horror, sci-fi and suspense while tracing generations of a family haunted by a mysterious death of one of its members in 1945.

Telling the story from the perspective of novelist Iris, sister of the woman who dies, Atwood adds an extra layer of intrigue by creating a novel-within-a-novel.

Showcasing Atwood's penchant for dystopias and her gift as a writer of science-fiction, or "speculative fiction" as she preferred to call it, this novel is the last of a trio set in a bioengineered future.

Starting in 2003 with "Oryx and Crake" and followed in 2009 by 'The Year of the Flood', the trilogy offers a philosophical and imaginative look at the consequences of scientific experimentation gone wrong.

Part of "Atwood's mastery is to use herself as a creative computer, modelling possible futures projected from the available data — in human terms, where we are now," British author Jeanette Winterson wrote in a review in 2009.

Atwood's highly anticipated sequel to 'The Handmaid's Tale' was inspired by readers' questions about the original novel as well as social and political developments since.

The build-up around its release was "more reminiscent of the unveiling of an iPhone or something Pokemon-related than that of a mere book," The Guardian newspaper wrote.

It is set more than 15 years after the events in 'The Handmaid's Tale', with the state of Gilead still in place but showing signs of decline, and follows the lives of three women who all appeared in the 1985 original. The book was nominated for the Booker Prize before it even hit the shelves.