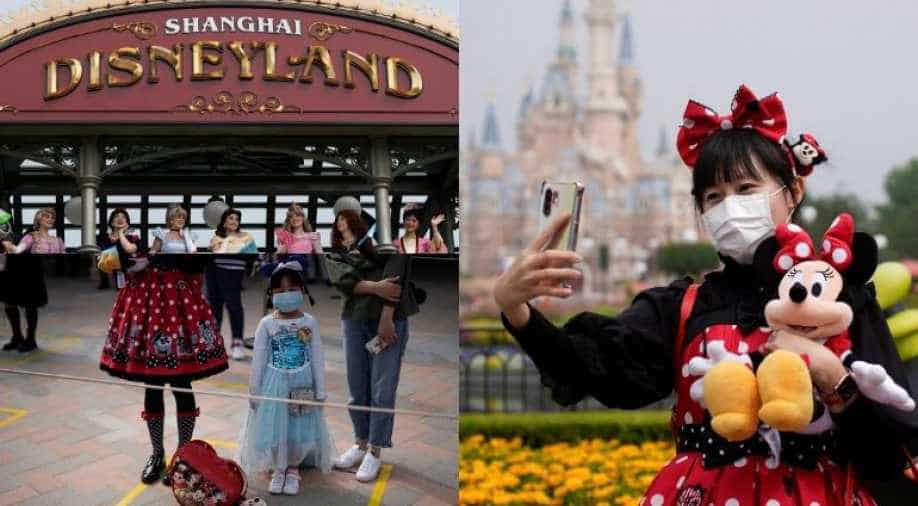 Walt Disney Co welcomed a limited number of guests to its two most popular parks at the sprawling Orlando complex.

Mickey waved from a distance and visitors wore colourful face masks with mouse ears on Saturday as Florida`s Walt Disney World opened to the public for the first time in four months amid a surge of coronavirus cases in the state.

Walt Disney Co welcomed a limited number of guests to its two most popular parks at the sprawling Orlando complex, the world`s most-visited theme park resort, with a host of safety measures designed to reassure visitors and reduce the chances of catching the sometimes deadly virus.

Executives felt confident they had a responsible plan for reopening in phases during the pandemic, said Josh D`Amaro, chairman of Disney`s parks, experiences and products division.

"This is the new world that we`re operating in, and I don't see that changing anytime soon," D'Amaro said in an interview on Saturday after he greeted guests and workers at the park.

Disney's reopening of parks in Asia helped provide assurance about moving ahead in Florida, he added. Disneyland Shanghai opened in May, followed by the Disneyland parks in Hongkong and Tokyo in June and July, respectively.

"I feel really good about our environment," D'Amaro said. "We're taking this seriously." Disney did not say how many people entered Walt Disney World on Saturday, but D`Amaro said he saw "really good demand" for reservations in the short term and into 2021.

At the Magic Kingdom and Animal Kingdom, the two parks that reopened Saturday, guests and employees wore face masks, underwent temperature screenings and were told to social distance everywhere from streets to rides. Plexiglass separated rows in lines, and ground markings indicated where people should stand.

Epcot and Disney's Hollywood Studios, the two other Walt Disney World parks, are scheduled to reopen on Wednesday. The resort suspended parades, fireworks and other activities that draw crowds, as well as up-close encounters with Mickey Mouse, Cinderella and other characters. Instead, characters appeared on floats or on horseback.


Some pictures online showed people close together waiting to get in. Disney employees, called cast members, began enforcing distancing requirements after about 30 minutes, Carlye Wisel, a journalist who writes about theme parks, said on Twitter.

Other videos showed people inside staying apart, cheering, taking selfies and enjoying the park without long lines. "I'm so happy to be back!" a fan who calls herself That Crazy Disney Lady said in a video posted on YouTube.

Florida has emerged as an epicenter of COVID-19 infections. Over the past two weeks, the state reported 109,000 new coronavirus cases, more than any other U.S. state. Still, many Disney fans and workers were eager for Disney World to open its gates. The resort employs 77,000 people.

Disney said it had trained employees to nudge guests who become lax about the rules. Plentiful signs and audio announcements every 10 minutes reminded visitors of the new measures.

"There is a shared responsibility here so guests are going to have to do their part," D`Amaro said. Coronavirus shutdowns have devastated Disney`s film, TV and theme park businesses. Having guests back at Walt Disney World is key to the company`s financial recovery. About 75% of the parks unit`s operating income comes from Orlando, Imperial Capital analyst David Miller estimates.

Florida's governor, Ron DeSantis, approved Disney World's reopening plans in late May, before the current surge. About 750 stage performers were absent because of a dispute over coronavirus testing. The Actors Equity union wants Disney to provide regular testing of members who must perform without masks.

Disney has said it is following health experts` recommendations to focus on other safeguards. If employees seek tests on their own, Disney`s health insurance will cover it, according to a source familiar with the matter.

Seven other unions reached an agreement with Disney on conditions for returning to work. Shanghai Disneyland has increased capacity from its original limit of 20%, or about 16,000 people a day when it re-opened in May. Guest surveys showed "exceptionally strong" satisfaction with the Shanghai experience and the safety measures, D`Amaro said.