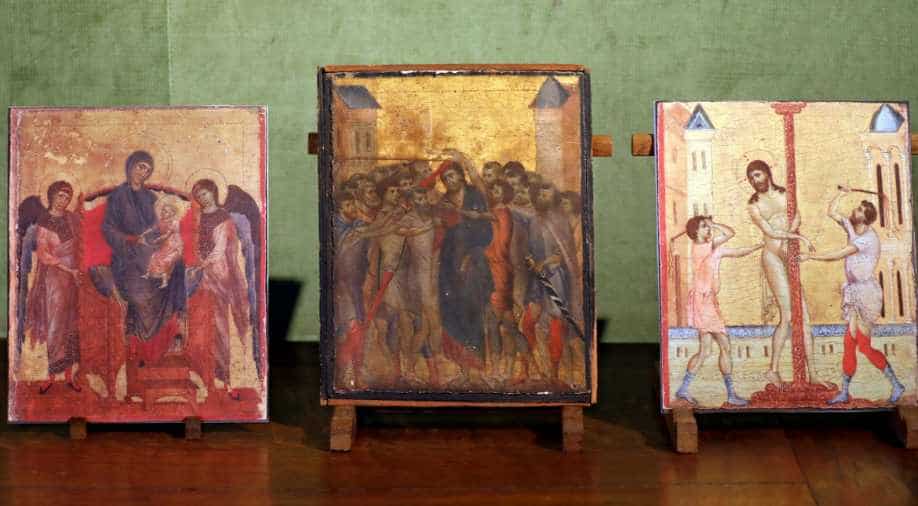 The painting "Christ Mocked" (C), a long-lost masterpiece by Florentine Renaissance artist Cimabue in the late 13th century, which was found months ago hanging in an elderly woman's kitchen in the town of Compiegne Photograph:( Reuters )

The 'Christ Mocked' painting by early Renaissance artist Cimabue was valued at 4 to 6 million euros ($6.6 million) by Paris old masters specialist Eric Turquin and will be sold by auction house Acteon in Senlis, north of Paris, on Oct. 27.

A long-lost painting by a 13th-century Italian master discovered in the kitchen of an elderly French woman has been valued at up to six million euros and will be sold at auction next month.

The 'Christ Mocked' painting by early Renaissance artist Cimabue was valued at 4 to 6 million euros ($6.6 million) by Paris old masters specialist Eric Turquin and will be sold by auction house Acteon in Senlis, north of Paris, on Oct. 27.

For years, the painting had hung close to a cooking plate in the kitchen of an elderly lady in Compiegne, north of Paris. It was found to be a Cimabue when an auction house specialist came to value her possessions.

Turquin said there was no doubt about the authenticity of the painting, as it was in the style of the Italian master and tunnels made by woodworms in the poplar wood panel match those of two similar Cimabues, a 'Madonna Enthroned' in London's National Gallery and 'The Flagellation of Christ' in the Frick Collection in New York.

"This is an important work in art history. Cimabue pushed the envelope, he broke with the Greek style of painting with no perspective and he introduced humanity. In 1280, that was totally new, he was a revolutionary," Turquin told Reuters.

The painting, executed in egg tempera, shows the figure of Christ surrounded by an angry crowd who have come to arrest him.

Turquin said the tiny painting - measuring just 20 by 26 cm (10 inches) - is believed to be part of a diptych consisting of eight small panels. It may have been cut apart by an art dealer in the 19th century to get a better price.

"Works by Cimabue are very rare. When I was an art student, I would never have dared to think that one day I would have the chance to hold a painting like this," he said.

Born in Florence, Cimabue, also known as Cenni di Pepo, was a pioneering Italian primitive painter, of whom only about 10 known works have survived. He was one of the first to use perspective and paint in a more natural style that broke with mediaeval and Byzantine traditions.