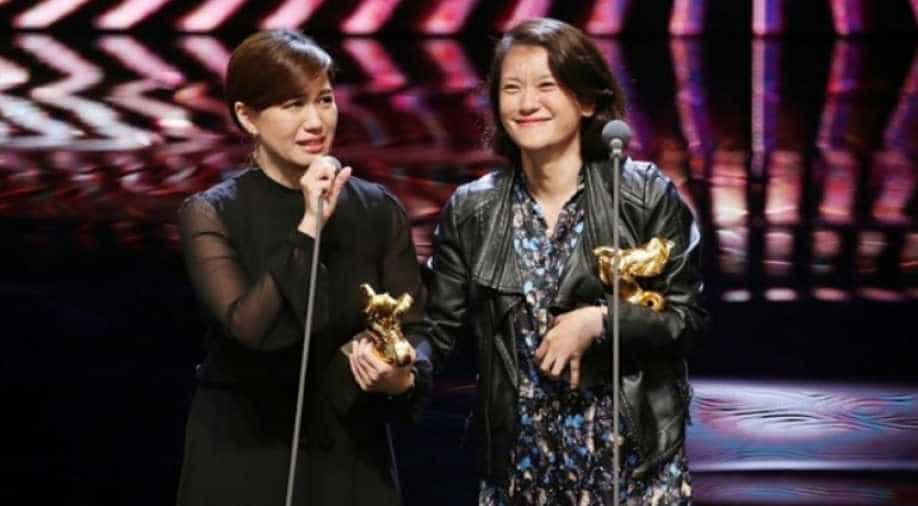 Director Fu Yue said during her acceptance speech Saturday that her biggest hope was for "our country" to be regarded as an "independent entity."  Photograph:( Others )

At Saturday`s ceremony, held in Taipei, documentary filmmaker Fu Yue called for Taiwan to be recognised as "an independent entity", sparking off a live sparring match between mainland and Taiwanese stars at the glitzy show.

The Chinese-speaking world`s version of the Oscars, the Golden Horse Awards, has created a sharp political divide between film stars and directors as the annual event becomes a lightning rod for questions about Taiwanese independence.

At Saturday`s ceremony, held in Taipei, documentary filmmaker Fu Yue called for Taiwan to be recognised as "an independent entity", sparking off a live sparring match between mainland and Taiwanese stars at the glitzy show.

Mainland actor Tu Men, while presenting an award, referred to Taiwan as "China Taiwan", while the chair of the awards committee, Oscar award-winning director Ang Lee, told reporters after the show that everyone was allowed to say what they wanted to say on stage.

However, he added: "We hope that art can be art, and that no political issues will interfere with it because art is very pure."

Taiwan is self-governed and has a democratically elected leadership, but China claims the island as a breakaway province and has not ruled out the use of force to ensure unification. The question of Taiwanese independence is one of Beijing`s most sensitive political concerns.

Tensions between China and Taiwan have grown since pro-independence President Tsai Ing-wen took power in 2016. Taiwan is now preparing for local elections on Saturday, seen as a bellwether for the ruling party`s performance in the 2020 presidential race.

Tsai herself weighed into the debate on Sunday saying that Taiwan had never accepted being called "China Taiwan".

"We can`t accept this term. Taiwan is simply Taiwan," she said on Facebook, adding she was "proud" of the awards ceremony which "highlighted that Taiwan was different from China, that being in our freedom and diversity".

"Taiwan is a democratic and open society," she said. "No one here will be silenced or disappeared because they have different views. We have no sensitive words that will be censored online."

Social media users also left close to 20,000 comments on Fu`s Facebook account after the show, with some criticising her support for Taiwan independence while others praised it. Some said she should not have politicised the ceremony.

In a separate statement on Monday, Taiwan`s ruling Democratic Progressive Party said the criticism of Fu was an attempt at "election interference from outside forces".

The Golden Horse Awards was one of the most discussed topics on China`s Twitter-like Weibo platform on Sunday, with a number of mainland stars also posting supportive posts about China`s claims over Taiwan.

Among them was A-list Chinese movie star Fan Bingbing, who earlier this year vanished for months from public view sparking widespread rumours about her whereabouts. She was fined for tax evasion last month and in her apology said her achievements were inseparable from the Communist Party.

Her Weibo post was her first since she issued her apology last month.

"China cannot be reduced even just a tiny bit," she wrote, alongside a map of Chinese territory, including Taiwan.