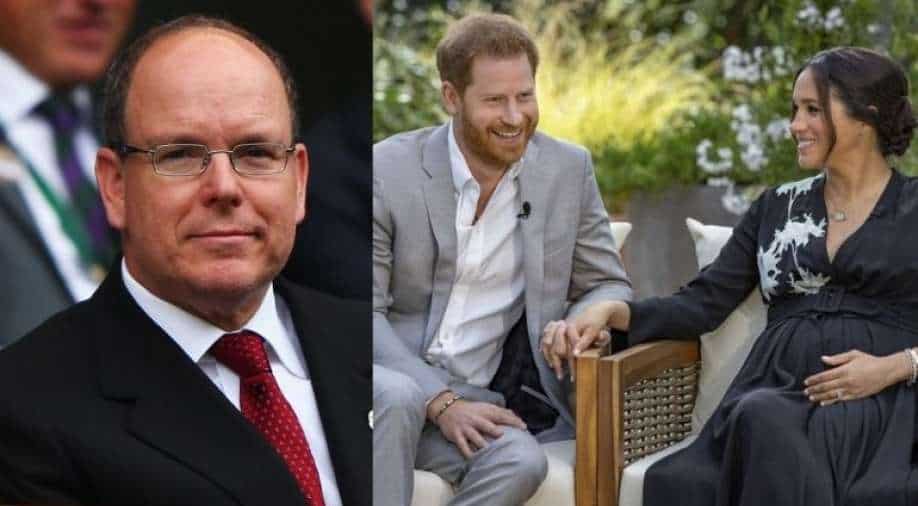 File images of Prince Albert (L) and Harry and Meghan Photograph:( Others )

Prince Albert of Monaco isn't too pleased with Prince Harry and Meghan Markle's tell-all interview to Oprah Winfrey. During their interview, the couple discussed issues they had with the British royal family.

Prince Albert of Monaco isn't too pleased with Prince Harry and Meghan Markle's tell-all interview to Oprah Winfrey. During their interview, the couple discussed issues they had with the British royal family.

While speaking to BBC World News, Prince Albert said he found the pair's 'public display of dissatisfaction' inappropriate considering the manner in which it was delivered.
Prince Albert said he "can understand the pressure that they were under," but added that "these types of conversations should be held within the intimate quarters of the family" and "it doesn't really have to be laid out in the public sphere like that."

"It did bother me a little bit," he said of Meghan and Harry's televised sit-down. "I can understand where they're coming from in a certain way, but I think it wasn't the appropriate forum to be able to have these kinds of discussions."

Meghan and Harry stepped down from their roles of senior members in the royal family in January 2020 and moved to America. The couple has a 22-month-old son Archie and are expecting their second child-  a baby girl- in summer this year.

When Prince Albert was asked if he wished Harry "the best", the Prince of Monaco said, "It's a difficult world out there, and I hope that he can have the judgment and wisdom to make the right choices."

During the Oprah interview, Meghan spoke about how she was 'silenced' by the institution and denied help when she was suffering a mental health crisis. She also stated that a member of the royal family was concerned about what skin colour Archie might have when he's born.

Meghan did not name the member and later Harry clarified that it was neither Queen Elizabeth II nor her husband Prince Philip.