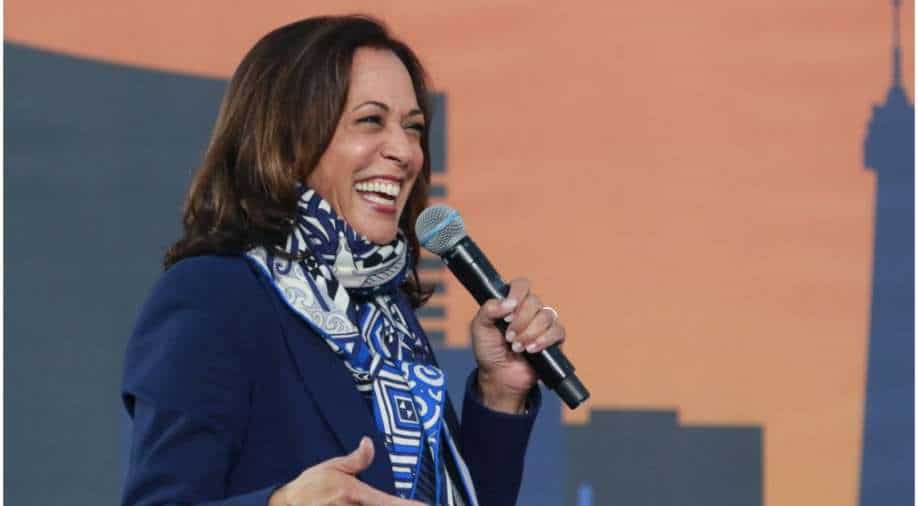 The list of Indian origin politians in the US cannot start without Kamala Harris. She is the running mate of Democratic Party's Joe Biden. If Biden wins, Kamala Harris will be first woman to assume the office of Vice-President of USA. Photograph:( AFP )

US vice president Kamala Harris has been criticised for wearing designer brand Dolce and Gabbana during her recent outings.

US vice president Kamala Harris has been criticised for wearing designer brand Dolce and Gabbana during her recent outings. In the past, D&G has courted controversy over its clothing as well as it advertising which many have termed as racially offensive.

Harris wore a polo-necked wool jumper from the luxury brand during a lunch with President Joe Biden recently. For the swearing-in ceremony of the treasury secretary, Harris chose a grey checked blazer and trouser suit, and a chevron jumper when Biden signed executive orders in the White House.
Vittora Vignone, who runs the popular Kamalas Closet handle on Instagram, slammed the outfits in a series of post. "Was it an oversight on the part of her team?" she asked.

“It’s possible but also incredibly sloppy. They could and should be better, especially after the triumphs of last week. The timing of this so soon after her inaugural choices championed lesser-known American designers of colour is awful no matter how you look at it.”

For her inaugural events in January, Harris chose to wear three black-run labels. Her choice was lauded by one and all. But her decision of choosing Dolce and Gabbana for her recent official engagements sparked a conversation on social media.

“Someone seriously needs to tell her team about Dolce and their problematic issues with race,” wrote one on Vignone's post. “I’m stunned she would wear them.”

D&G had shared a with Melania Trump and faced criticism for dressing her in all black to meet the pope and attend a G7 summit.

“I don’t think it’s a good idea for Kamala to wear so many new expensive items during her first week in office,” Vignone also added. “I also don’t think she should be wearing non-American designers, especially when there are so many American brands to choose from … she and her team should care about the impact her choices have. For example, she could lift up a smaller or more affordable business instantly.”

Harris is the first south Asian, black and female vice-president in US history.