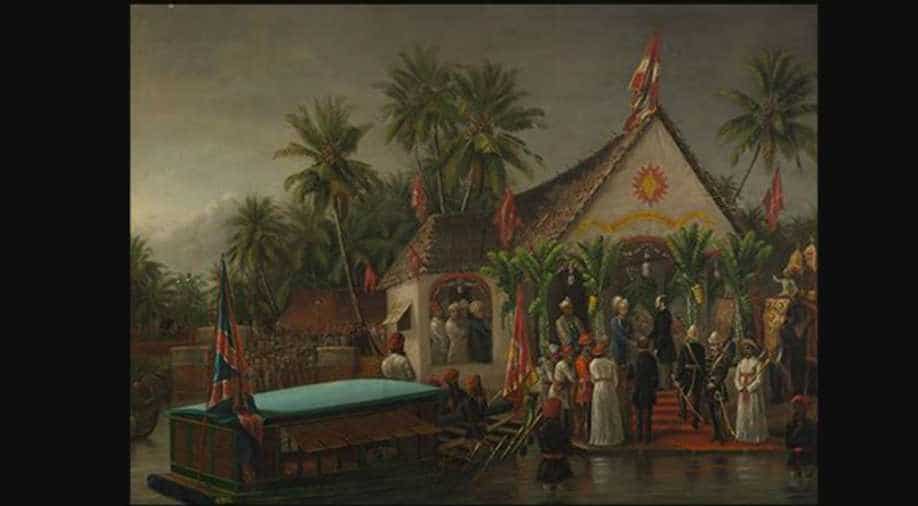 The Maharaja of Travancore and his younger brother welcoming Richard Temple-Grenville, 3rd Duke of Buckingham and Chandos, Governor-General of Madras (1875-80), on his official visit to Trivandrum in 1880. (An Artwork by Raja Ravi Varma) Photograph:( Zee News Network )

Raja Ravi Varma won an award for an exhibition of his paintings at Vienna in 1873 and his works were also displayed at the World`s Columbian Exposition at Chicago in 1893 and won him three gold medals.

A prolific artist if there was one, Raja Ravi Varma (1848-1906), who was closely related to the royal family of Travancore in the present-day Kerala state, produced some 7,000 paintings of women in their various manifestations and of Hindu gods and goddesses, blending European aesthetics with Indian images that resonate even today.

He established the first lithographic press in India, which created prints of his mythology-inspired paintings, in particular, scenes from the Mahabharata and Ramayana. It was the first big step towards making art affordable for everyone.

He won an award for an exhibition of his paintings at Vienna in 1873 and his works were also displayed at the World`s Columbian Exposition at Chicago in 1893 and won him three gold medals. In 1904, the Viceroy, Lord Curzon, bestowed in him the Kaiser-i-Hind gold medal while a college dedicated to fine arts was created in his honour at Mavelikara as have been many cultural organisations throughout India bearing his name.

That he transcended time and space can be gauged from the fact that the Varma crater on the planet Mercury was named after him in 2013 by the International Astronomical Union.

It is thus in the fitness of things that multi-faceted media personality Shobha Tharoor Srinivasan should have penned a biography aimed specifically at children but will also appeal to readers across the spectrum.

"Prince with a Paintbrush: The Story of Raja Ravi Varma" (Westland/Red Panda), is an inspirational tribute to a precocious child who, while others of his age were busy playing hopscotch with their friends, was painting on the walls of his house.

"The idea of a series on Indian artists had been percolating in my mind for a while and I was writing poems inspired by Raja Ravi Varma`s art. As I saw it, there was a famous 19th-century Indian painter who blended European aesthetics with Indian images and connected the world more than a century ago, and yet so few children seemed to know him," Srinivasan said.

"When I heard from publisher Karthika a year ago about Westland`s recently launched children`s imprint, Red Panda, I knew that my work would be carefully curated and professionally produced. I`m so very happy to have signed with Westland, and very excited to share this beautifully illustrated biography of Raja Ravi Varma with the world," added Srinivasan, the sister of author-diplomat-politician Shashi Tharoor, who lives in the San Francisco Bay Area with her family.

"My first encounter of California was as a wife, mother and householder. I navigated CA with different needs and made family friends who had had a different upbringing or had been raised differently so I had a chance to learn about another India or a life other than mine. The Bay Area has been hospitable in all ways: the incredible weather, the beautiful surroundings, the vibrancy and colour of many races and cultures and the richness of wonderful friendships," Srinivasan said in an interview to americanbazaronline.com .

"Here my daughter could be introduced to the music and mythology that is part of Indian classical dance without travelling to India to learn it, and my son could try his vocal talent on Bollywood music if he so chose," she added.

Srinivasan is a children`s author, poet, translator, editor and voice-over talent. She is also a former non-profit development professional who spent two decades as an advocate and fundraiser for persons with disabilities.

She has done voice-work for documentaries, educational programs, journalistic initiatives and audiobooks. She has published children`s books in India and the United States, including "A Pie Surprise and Other Stories", the award-winning "Indi-Alphabet", and most recently, "How Many Lines in a Limerick?" Her work has been anthologised by Tulika Books, Solstice and Skipping Stones. Essays and reviews have been published in India Currents and Scroll.in.