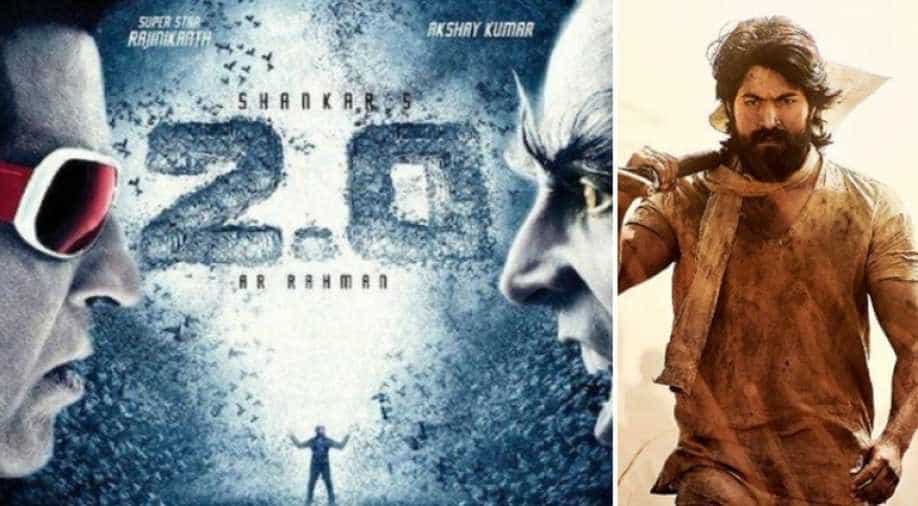 The crossover is not just happening with southern films, Bollywood is also coming on board. Photograph:( WION Web Team )

When it comes to making larger-than-life films Bollywood seems to have ceded ground to its southern counterparts, but the producers in Hindi cinema are waking up to the pan-India appeal of these stories.

With the pressure of three-day box office performance worrying even the biggest of the stars, the producers and actors are looking beyond their core audience.

2018 was a remarkable year in this regard as Akshay Kumar, the quintessential Bollywood hero, traded his charm to play a villain in a Rajinikanth film, which went beyond the southern audiences to woo the Hindi belt with its grand scale and visual effects.

It all started with the 'Baahubali' franchise that reached its conclusion in 2017. SS Rajamouli's film had southern stars but such was its epic scale that it became a pan-Indian hit with its lead stars Prabhas, Anushka Shetty and Rana Daggubati becoming national stars.

When it comes to making larger-than-life films Bollywood seems to have ceded ground to its southern counterparts, but the producers in Hindi cinema are waking up to the pan-India appeal of these stories.

Karan Johar was one of the early names to realise this potential and presented both 'Baahubali' and S Shankar-directed '2.0' in Hindi.

"The makers look for a right reason to release the film in other markets, besides their own. Like, '2.0' had Bollywood actor Akshay Kumar and producer Karan Johar so it was released in the Hindi region.

"Even in the case of 'Baahubali', Karan was presenting it for the Hindi market, so it was released here. These films have done decent business in Hindi region," distributor Rajesh Thadani told PTI.

Prasad believes for a film to crossover, it needs to have the perfect balance of emotions and vision.

"People are ready to see a film irrespective of who has made it and who is in it. This kind of response only encourages creative people. The film has set the bar in every which way and I am happy about that," Prasad told PTI.

"A crossover film has to have the right content coupled with right emotions. It should be a big screen spectacle to draw an audience from different parts of the country to theatres," he added. This crossover is not just happening with southern films, Bollywood is also coming on board.

Sanjay Leela Bhansali, the director known for his grand vision, had subtitles added to 'Padmaavat' for its release down south. The film did great business all over India despite or maybe because of the many controversies ahead of its release.

"'Padmaavat' was a magnum opus. It had grandeur and a great story. It released in the southern markets, which is known for making visually appealing films. The film did decent business in south. Unfortunately, Aamir Khan-Amitabh Bachchan's 'Thugs...' did not fair well," Thadani said.

Industry insiders believe this crossover trend of releasing films in different regions will only boost entertainment business and put Indian cinema on a global map.
"From business perspective, it is a win-win situation. The highest film in the Hindi belt is a Telugu movie 'Baahubali' that was dubbed in Hindi," film exhibitor Akshay Rathi said.
Having an actor from a respective region opens up new possibilities for a film and the producers are suddenly realising that diversity is good for business.
Richa Chadha and Pankaj Tripathi, both actors of repute in Hindi cinema, are starring in the Shakeela biopic, which marks the directorial debut of Indrajit Lankesh in Hindi.
"We felt the story had to be told for a bigger audience from a greater stage. So we had to choose Hindi. We are bringing the audiences from the south and the north closer.

"With Richa and Pankaj, we are taking a pan-India approach. We also have Malayalam actor Rajeev Pillai and Esther who has acted in Konkani, Mangalorean and Kannada films. We hope to bring India together," Lankesh had told PTI.

Tripathi said, "Cinema is an art form that connects everyone. Emotions are same everywhere, we all want to be happy and enjoy and get lost in the world of films. Cinema knows no boundaries."

"We should learn from each other and make our Indian film industry better. Every industry has their own USP and this crossover culture is a nice learning experience for all," Yash told PTI.
His film has been presented by Farhan Akhtar in the Hindi market.

"I think barriers are coming down every single day and the world is becoming a smaller place. We are enjoying work from (different) cultures and languages which we weren't familiar with many years ago," Farhan said.

Tripathi and Huma Qureshi also featured in the Rajinikanth-starrer Tamil film 'Kaala', which won critical acclaim for its director Pa Ranjith's astute analysis of caste politics.
The trend is only going to enjoy an upward swing in 2019 as Amitabh Bachchan will be making a guest appearance in Chiranjeevi's Telugu film 'Sye Raa Narasimha Reddy', Vidya Balan is the leading lady in NTR biopic, Shraddha Kapoor and Neil Nitin Mukesh will be seen in Telugu language film 'Saaho'.