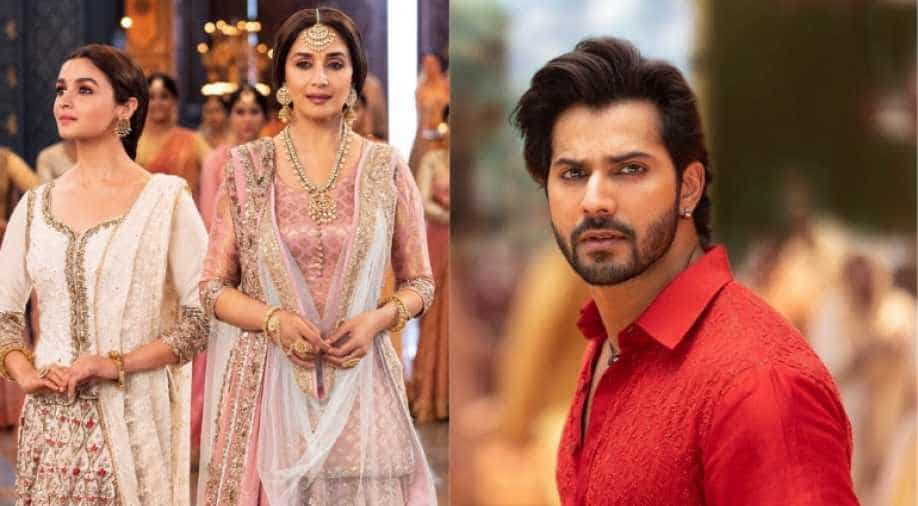 Stills from the song 'Ghar More Pardesiya' from the film 'Kalank'. Photograph:( Twitter )

Instead of Madhuri Dixit, we get to see Alia Bhatt dancing gracefully to the song that has been beautifully sung by Shreya Ghoshal.

The first song of Abhishek Varman directed 'Kalank' is out. Titled 'Ghar Mohe Pardesiya', the song presents Alia Bhatt in a completely new avatar- that of a dancer. Alia can be seen performing Kathak in the film as Madhuri Dixit looks on. Yes, instead of Madhuri Dixit, we get to see Alia Bhatt dancing gracefully to the song that has been beautifully sung by Shreya Ghoshal.

Composed by Pritam, the lyrics have been written by Amitabh Bhattacharya. The song also features Varun Dhawan.

Dressed in a white ensemble, Alia looks breathtaking as she dances gracefully and with finesse. The song also gives a glimpse into the grandeur that Varman and producer Karan Johar has created for the film. The song and its grand, elaborate sets may remind some of Sanjay Leela Bhansali's opulent sets in his historic period dramas but whatever the inspiration might have been, the song is visually rich and absolutely captivating.

'Kalank' is one of Karan Johar's most ambitious projects. Apart from Madhuri Dixit, Varun Dhawand and Alia Bhatt, the film also features Aditya Roy Kapoor, Sanjay Dutt and Sonakshi Sinha. The film is scheduled to release on 19th April.

'Godzilla vs. Kong' trailer: It's the fight between two of the greatest beasts from monterverse

BTS to release the Essential Edition of their latest album 'BE'