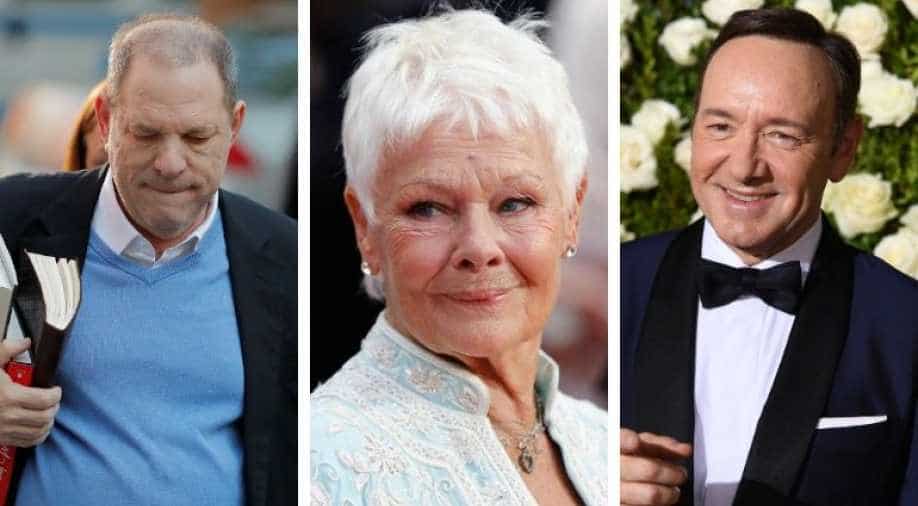 The actor has previously condemned the behaviour of Spacey and Weinstein, who have both been accused of sexual harassment.

Veteran actor Judi Dench defended disgraced Hollywood producer Harvey Weinstein and actor Kevin Spacey as artists, saying their contribution to the cinema should not be forgotten.

The 84-year-old actor made the comments during an interview with Radio Times, reported Deadline.

The actor has previously condemned the behaviour of Spacey and Weinstein, who have both been accused of sexual harassment. However, she told the publication that their screen and stage work should not be diminished.

In reference to Spacey being removed from Ridley Scott`s 2017 film `All The Money In The World`, the Oscar-winner said, "What kind of agony is that? Are we going to negate 10 years at the Old Vic and everything that he did (as artistic director) - how wonderful he`s been in all those films? Are we just not going to see all those films that Harvey produced?"

Dench has previously defended Spacey after he was removed from `All The Money In The World`, amid accusations of sexual conduct by several men in the US and UK.

She was one of the first female celebrities to slam Weinstein over the accusations, reported Fox News.Dench had also credited Weinstein with contributing to her career, reported to The Hollywood Reporter.

Allegations of sexual misconduct against Weinstein were responsible for expanding the #MeToo movement.Dench also defended Spacey, whom she describes as a "good friend", at last year`s San Sebastian Film Festival.

At a press conference, the actor said, "I can`t approve, in any way, of the fact that -- whatever he has done -- that you then start to cut him out of the films...Are we to go back throughout history and anyone who has misbehaved in any way, or who has broken the law, or who has committed some kind of offence, are they always going to be cut out? Are we going to extrude them from our history? I don`t know...."

Both Spacey and Weinstein have denied all the allegations levelled against them.