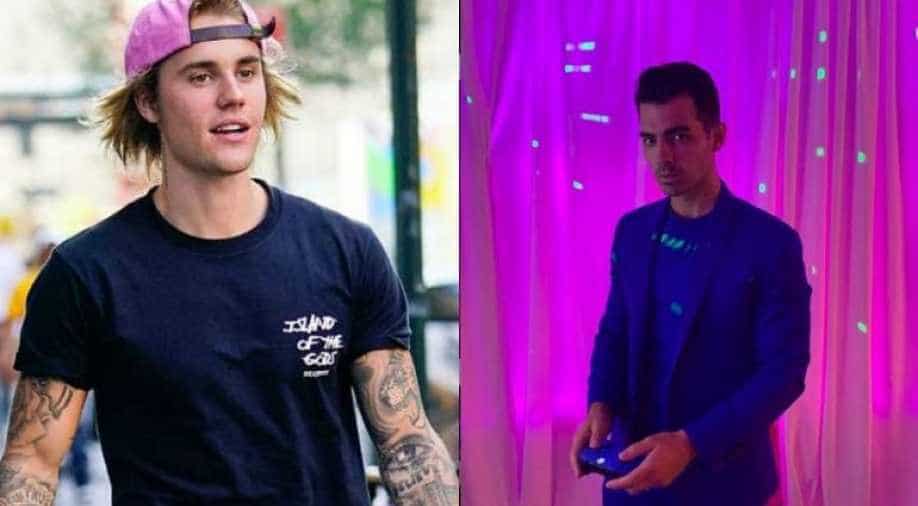 Singer Joe Jonas chose a very interesting choice of the outfit while attending the US Open with brother Nick Jonas.

The picture portrayed on Joe's shirt appeared to be taken from one of Bieber's outings over the summer, when the 25-year-old singer was spotted in West Hollywood wearing a shirt with a throwback photo of the Jonas Brothers group on it, which was from his own clothing line, Drew.

Although Joe's choice of the outfit could be a sign of the duo's mutual affection for one another, it could also be a sign that Bieber has become the latest celebrity to join the Jonas brothers in a light-hearted prank war or maybe a hint at a new collaboration.

In February, Nick started a prank war with actor John Stamos, who had been spotted several times over the years wearing Jonas Brother T-shirts. Taking notice, Nick stepped out wearing a sweatshirt that had a photo on it of the 'Fuller House' star wearing a JoBros T-shirt.

"It's your move @johnstamos," he wrote, sharing the photo on Instagram. Stamos was quick to hit back and created a pillow with a photo of Nick sweatshirt on it, which Nick proceeded to get made into a large blanket.

Escalating things even further, the 'You' actor even appeared to get an apparent tattoo of Nick's face on his arm. "#jobrosforlife" he captioned a photo of his tattoo artist getting to work. Stamos even got Joe in on the prank fun after the actor chimed in with his own extra special song request.

Before the group embarked on their Happiness Beings tour earlier this year, Joe shared a post on Instagram asking fans which track they'd most like to see the band perform.

Choosing a number that's very much outside their list, Stamos suggested "Forever!" a reference to the Beach Boys classic his character Uncle Jesse sings to his wife during their wedding ceremony.

This isn't the first time Joe was spotted at the US Open. The singer joined his now-wife, Sophie Turner, at the US Open in September 2018. The couple made things official in May when they tied the knot in a surprise Las Vegas wedding. The two married for a second time in France the following month.