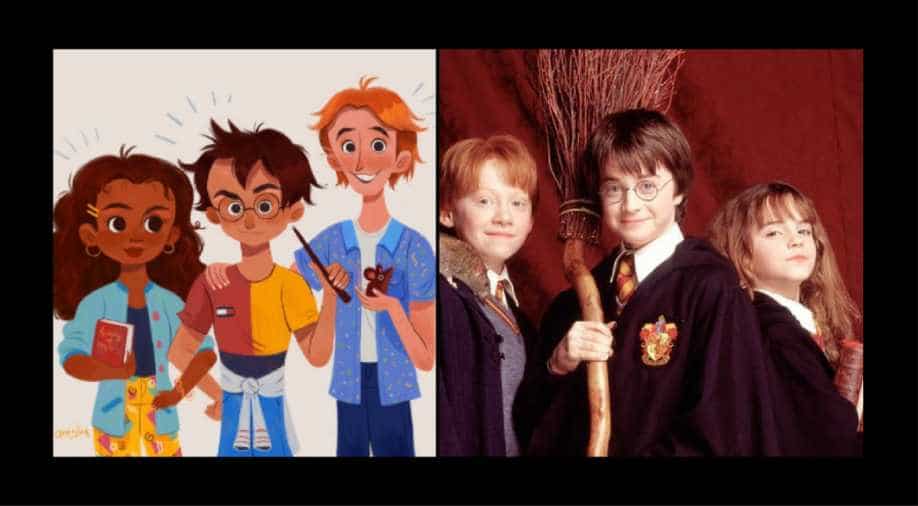 The characters of Harry Potter, Hermione Granger, and Ron Weasley as an illustrated artwork and in movie Photograph:( Others )

The British author has introduced a new online hub called Harry Potter At Home, which is aimed at younger children

Author JK Rowling has just come to the rescue of parents worldwide who are finding it difficult to keep their children at home in time of self-isolation.

The British author has introduced a new online hub called Harry Potter At Home, which is aimed at younger children and will be launched on the official website for of Potter called WizardingWorld.com.

The first book from the Potter series, ' Harry Potter and the Philosopher`s Stone' will be available for free worldwide as an ebook as well as an audiobook throughout the month of April to help parents and carers entertain and engage housebound children.

Parents, teachers and carers working to keep children amused and interested while we’re on lockdown might need a bit of magic, so I’m delighted to launch https://t.co/cPg0dZpexB pic.twitter.com/i0ZjTplVoU

Each week 'Wizarding Wednesdays' and an email newsletter will provide creative activities, quizzes and ideas.
The coronavirus pandemic has seen more and more countries limiting citizens` movements, closing schools and leaving many parents simultaneously working from home and looking after their children.

Britain is in its second week of lockdown, after Prime Minister Boris Johnson announced on March 23 that people would only be allowed to leave the house when absolutely necessary, such as to buy food.

"The teachers, parents and carers working to keep children`s lives as normal and happy as possible while we`re all on lockdown deserve a bit of magic," Rowling said.

"I hope these initiatives will give children and even adults a happy distraction during their enforced stay-at-home time."