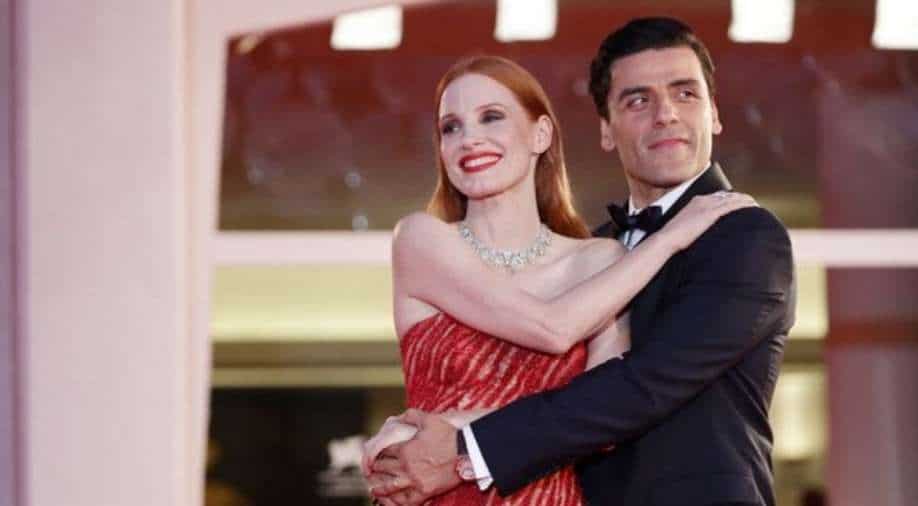 Jessica Chastain and Oscar Isaac's chemistry was in full display on Saturday as they posed on the red carpet of the Venice Film Festival.

Jessica Chastain and Oscar Isaac's chemistry was in full display on Saturday as they posed on the red carpet of the Venice Film Festival.

The two actors who were at the festival for the premiere of their new film 'Scenes From A Marriage' raised eyebrows for kiss that Isaac planted not on Chastain's lips or cheeks but her arm. The video capturing the moment was shot in slow motion, giving fans a treat to the chemistry the two share on the stage.

Days later, while the world continued to watch Isaac kiss Chastain, in slow motion on social media, the actress took to Twitter to react to the video. She chose to take an Adams Family reference and promote her new film at the same time. Tweeting a black and white image of Gomez kissing Morticia Adams' arm in a similar fashion, Chastian wrote, “Sept 12th,” she wrote, the date. 'Scenes From a Marriage' debuts on HBO and HBO Max, adding a purple emoji with horns, signifying trouble.

Chastain's reaction came after Twitter was flooded with reactions to the now-viral kiss.

do you ever find yourself playing this clip of oscar isaac kissing jessica chastain’s arm on a loop or are you normal pic.twitter.com/sWl6tTt2DD

oscar isaac’s wife and jessica chastain‘s husband when they get home: pic.twitter.com/StEQnEf9wQ

Both actors are married with children and have been known to be close friends since their film school days which explains their camaraderie on the red carpet.

While many pointed out how the whole act was staged, but the two actor's fondness for each other is hard to miss.

Looking for an easy weekend? These short films may be your dream way to unwind