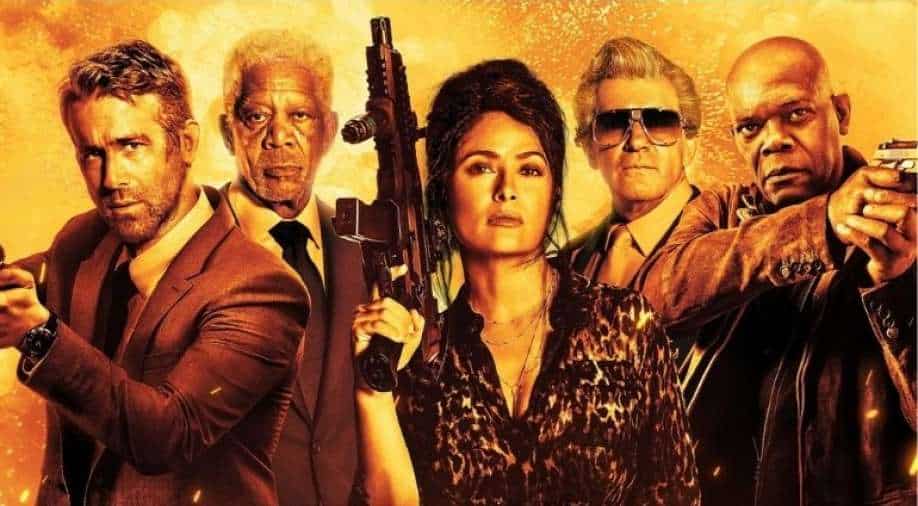 'The Hitman`s Wife`s Bodyguard' nabbed the top spot on box office charts, debuting with $11.6 million from 3,331 U.S. venues over the weekend.

'The Hitman`s Wife`s Bodyguard' nabbed the top spot on box office charts, debuting with $11.6 million from 3,331 U.S. venues over the weekend.

The Lionsgate movie, a sequel to the 2017 action comedy 'The Hitman`s Bodyguard,' opened on the big screen on Wednesday and has collected $17 million to date. However, the film cost nearly $70 million to produce so it could face challenges turning a profit in theaters.

Starring Salma Hayek, Ryan Reynolds and Samuel L. Jackson, 'The Hitman`s Wife`s Bodyguard' is one of the rare post-vaccine era movies to play exclusively in theaters. Opening weekend crowds were mostly older men, with 55% of ticket buyers identifying as male and 66% over the age of 25.

As the only new nationwide release, the poorly reviewed 'The Hitman`s Wife`s Bodyguard' didn`t have much competition to claim No. 1 in North America. Falling not far behind, Paramount`s 'A Quiet Place Part II' slid to second place with $9.4 million in ticket sales, representing a mere 22% drop from the weekend prior. After four weeks in theaters, the film -- directed by John Krasinski and featuring Emily Blunt -- has generated a strong $125 million to date.

Elsewhere on box office charts, 'In the Heights,' director Jon M. Chu`s adaptation of Lin-Manuel Miranda`s hit Broadway musical, failed to sustain crowds in its second weekend of release. The acclaimed film fell to the No. 6 spot with $4.3 million in revenues, a brutal 62% decline from its inaugural outing. 'In the Heights,' which is currently playing on HBO Max, has amassed $19.8 million on the big screen to date. At this rate, the $55 million-budgeted movie will struggle to climb out of the red.

In third place, Sony`s family film 'Peter Rabbit 2: The Runaway' collected $6.1 million in its sophomore frame, bringing its domestic tally to $20.3 million through Sunday. The film has done notably better business overseas, with ticket sales hovering at $70.5 million.
The Warner Bros. horror movie 'The Conjuring: The Devil Made Me Do It' and Disney`s '101 Dalmatians' prequel 'Cruella' will duke it out for fourth and fifth place once final figures are tallied on Monday. According to Sunday estimates, both films brought in $5.1 million over the weekend. The former, which is being offered on HBO Max, has pulled in $53.5 million at the U.S. box office. The Emma Stone-led "Cruella," which is available on Disney Plus for a premium $30 rental fee, has made $64.7 million in the U.S. and $95.2 million overseas.

In a box office milestone, 'Godzilla vs. Kong' became the second COVID-era release to cross the $100 million mark at the domestic box office. It took the monster mashup over a month and a half to surpass that milestone. Overseas, the movie has taken in $342 million for a global haul of $442 million.

Meanwhile, indie films without blockbuster-level promotional efforts haven`t been attracting notable audiences. Among limited releases, Edgar Wright`s music documentary "The Sparks Brothers," from Focus Features, premiered in 534 locations and brought in $265,000 -- translating to a tepid $489 per location. The similarly well-reviewed Roadside Attractions doc 'Rita Moreno: Just a Girl Who Decided to Go For It' pulled in $75,715 from 227 screens for a weak $334 per-screen average.

As the box office attempts to rebound from a tough 18-month period, Universal`s 'Fast and Furious' sequel 'F9' is expected to provide a much-needed shot in the arm to theater operators. Already, the high-octane tentpole is nearing the $300 million mark internationally with ticket sales currently at $292 million.