Priyanka Chopra takes an indirect dig at Rosie O'Donnell's apology: Google my name, don’t refer to me as wife 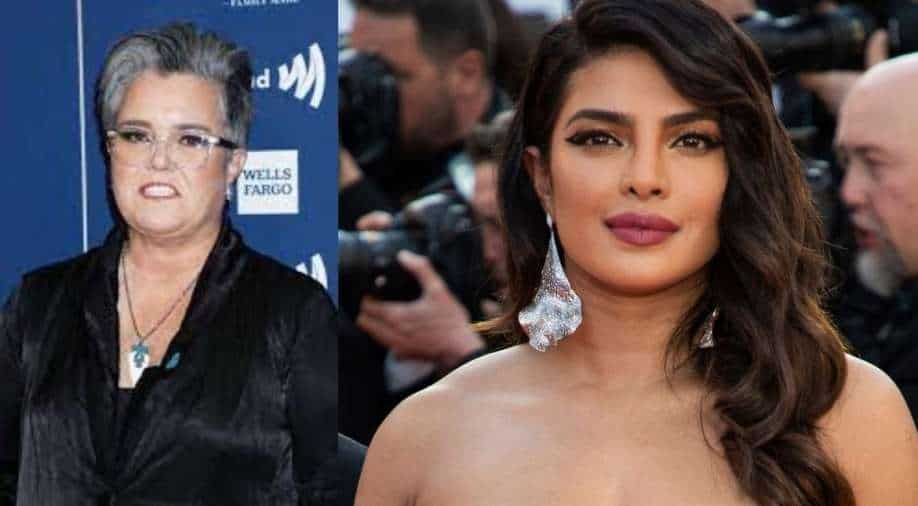 For the unversed, Priyanka Chopra's dad was Dr Ashok Chopra, who died due to cancer in 2013.

Priyanka Chopra is just sharing her thoughts on how to make a sincere apology.

Chopra's serious suggestion came after comedian Rosie O’Donnell apologized to her and Nick Jonas after having an awkward encounter with them at Nobu in Malibu, where Rosie mistook Priyanka for author and influencer Deepak Chopra's daughter.

Later, O'Donnell posted a video on her Tik Tok account and on her Instagram, in which she talked about the awkward interaction and shared her apology.  Explaining the moment, she referred to Priyanka as ‘the Chopra wife’ and ‘someone Chopra’.

“Seated next to us was Nick Jonas and his wife, someone Chopra… which I always assumed was Deepak Chopra’s daughter. So when I said, ‘Hi Nick Jonas, you were great in ‘Kingdom’, and, ‘Hi (Priyanka) I know your dad’. She goes, ‘You do? Who’s my dad?’ And I go, ‘Deepak’. And she goes, ‘No… and Chopra is a common name.'”

Further, O’Donnell added, “I felt so embarrassed. Didn’t you think Nick Jonas was married to Deepak Chopra’s daughter? Am I the only one who thought that? I had one job. I messed it up, so Nick Jonas I apologize, and to the Chopra wife… I apologize, too.”

Without taking her name, Priyanka later reacted to an apology. Posting a small message on her Instagram story, the actress reacted to how Rosie referred to her as Nick Jonas's wife and Chopra wife. By giving Rosie, a piece of advice to google her name before making a public apology, Priyanka wrote, “Hi everyone. Some thoughts. I have never taken myself so seriously to think everyone would know who I am, or my work for that matter.''

''But if you wanted to make a public apology for a very awkward private encounter, I think probably best to take the time to google my name before doing it or even try to reach out directly. We ALL deserve to be respected for our unique individuality and not be referred to as ‘someone’ or ‘wife’, especially in a sincere apology,'' she added.

''If we can learn to respect our differences in an authentic way, the world we raise our children in. will be amazing. Also PS – As I’ve said before, not all Chopras are related to the great Deepak, just as not all Smiths are related to the legendary Will Smith,'' Chopra concluded her message. 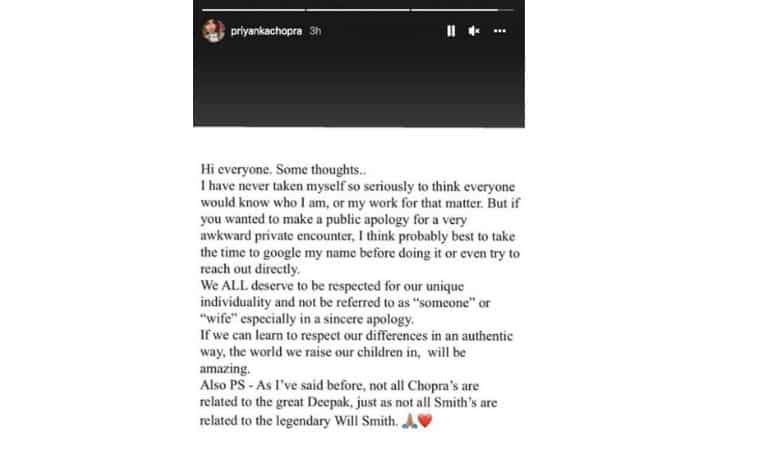 In the next video, O'Dennell made an apology after being criticized for referring Priyanka, who has carved her niche in both India and the West cinema as “Chopra wife” in the original apology clip.

“She’s apparently a very well-known actress and more famous than [Jonas]. So I’m sure it felt weird to her to begin with. “Anyway, Priyanka is her name. And I just want to apologize to her and to everyone who thought it was really inappropriate of me. Sometimes I f**k up.”

She also posted a screenshot of Priyanka’s Instagram profile, highlighting her 75 million followers on the photo-sharing platform.

For the unversed, Priyanka's dad was Dr Ashok Chopra, who died due to cancer in 2013.

On the work front, Chopra was last seen in Keany Reeves starrer 'The Matrix Resurrections' The actress will be seen in 'Citadel' and 'Text For You', and she's also working on a Bollywood project with Alia Bhatt and Katrina Kaif for the first time in Farhan Akhtar's movie, 'Jee Le Zara'.