Oscars 2022: 'CODA' wins big on a night of punches, jabs and reunions 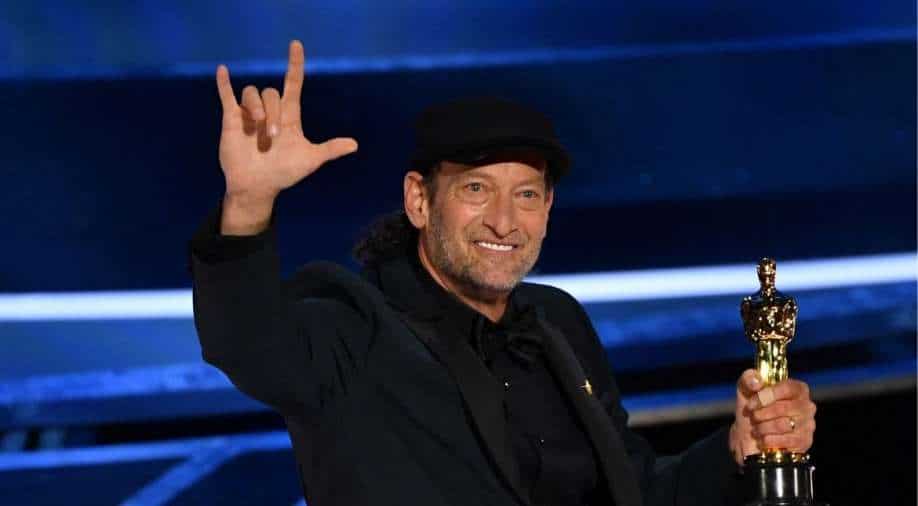 Tory Kotsur won for his performance in 'CODA' Photograph:( AFP )

It was a night when Will Smith smacked comedian Chris Rock live on stage for making a joke on his wife Jada Pinkett Smith.

It was a night that even the greatest movie writers wouldn't have been able to script this right. There were jokes, jibes, emotional speeches, historical wins and even smacking and abusing - all on the Oscars 2022 stage.

It was a night when Will Smith smacked comedian Chris Rock live on stage for making a joke on his wife Jada Pinkett Smith. 'Keep my wife's name out of your f-----ng mouth' said the actor as he went back to his seat as the entire Dolby theatre hushed into silence. Minutes later Smith took home his first Oscar as he won in the Best Actor category for 'King Richard'.

The actor delivered an emotional speech, apologised to his fellow nominees and the academy and hoped that they would call him back again.

Jessica Chastain was the lone nominee in the acting category for the film 'The Eyes Of Tammy Faye' but that was enough as Chastain too won her first Oscar in the Best Actress category. She spoke about love, raised awareness about suicide awareness and LGBTQ rights in her winning speech.

The night was historic as 'CODA' won Best Picture, Adapted Screenplay and Best Supporting Actor award. Troy Kastur became the second deaf actor in the history of Oscars to win an award. Kastur dedicated his win to the deaf and the disabled community. As the team of 'CODA' went up on stage to collect the Best Picture award, the audience cheered and applauded them in sign language and gave them a standing ovation.

The supporting actress went to Ariana DeBose for playing the spirited Anita, who sings 'America' in Steven Spielberg's remake of 'West Side Story.'

The night had Amy Schummer, Regina Hall and Wanda Sykes taking jabs at almost everything and everyone as hosts. Hall even did an impromptu COVID check on the most eligible bachelors in the room which included actor Simu Liu, Bradley Cooper, Jason Momoa and Timothee Chalamet.

The night saw the reunion of two iconic films - 'The Godfather' and 'Pulp Fiction.' Francis Ford Coppola, Robert DeNiro and Al Pacino came to celebrate the 50 years of the cult classic and extended their support to Ukraine. Meanwhile, John Travolta and Uma Thurman danced as Samuel L Jackson celebrated 18 years of 'Pulp Fiction' as they gave out the Best Actor award.

The Academy also gave a silent salute to Ukraine during the ceremony. But rather than turning the Oscars ceremony into a megaphone for messages about Ukraine, the show's directors opted for a silent message that did not mention Russia, which launched a full-scale invasion of Ukraine 31 days ago.