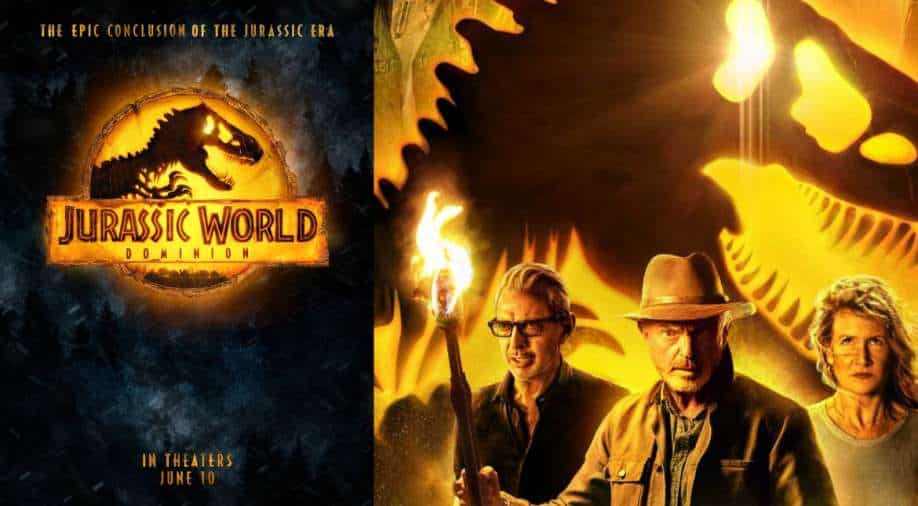 In 'Jurassic World Dominion' the third and final film of the series,the makers bring back the legacy cast- Sam Neil, Laura Dern and Goldblum- and cast them alongside Jurassic World actors Chris Pratt and Bryce Dallas Howard.

Near the fag end of filmmaker Colin Trevorrow's 'Jurassic World Dominion', the ever-charming Jeff Goldblum's Ian Malcolm looks at Chris Pratt's Owen Grady and asks in bewilderment, "You made a promise to a dinosaur?!" but Prat chooses not to reply, instead of straps a gun and heads towards a DNA mutating laboratory to rescue a baby raptor because he had indeed promised his mother, a CGI enabled dinosaur that he would bring back its child. If you are as amazed and mildly shocked as Goldblum's character at the film's plot, then you are not the only one.

When Steven Spielberg had first introduced the concept of humans and dinosaurs existing side by side in the 1993 film 'Jurassic Park' - the world was different and the concept felt new and exciting. For a generation that grew up in the 1990s, 'Jurassic Park' and subsequent 'Lost World' and even 'Jurassic Park III' provided a world of possibilities and what-ifs. Sure one had to stretch one's imagination to be convinced about the realm that Spielberg created but it still made for an exciting watch- especially the first two films.

In 'Jurassic World Dominion' the third and final film of the series (thank god for that) the makers bring back the legacy cast- Sam Neil, Laura Dern and Goldblum- and cast them alongside Jurassic World actors Chris Pratt and Bryce Dallas Howard.  Hollywood has been riding high on nostalgia off late. Marvel brought back its two old Spidermans in the new film and introduced the concept of the multiverse and Tom Cruise more recently played a character that he had played 35 years ago in 'Top Gun: Maverick'. And so, when the makers announced that the third part of 'Jurassic World' would feature the legacy cast along with current lead actors, there was a certain amount of excitement and curiosity to see how it would unfold.

While the actors remain in top form and one can't help at Goldblum's bumbling charm and Dern and Neil's chemistry, they cannot salvage a film that has a paper thing plot- full of repetitive stunts and scenes that seemed to have been lifted right from the 1990s Jurassic Park series.

If you must know the plot, it is set in an apocalyptic world where dinosaurs run amock in the wilderness and the bylanes of Malta with equal aplomb. Former Jurassic World employees Owen Grady (Pratt) and Claire Dearing (Howard) live in the middle of the jungle and work towards the protection of dinosaurs and rehabilitating some who have been poached. They also have an adoptive daughter Maise (Isabella Sermon) who is actually a clone of Benjamin Lockwood's daughter. If human clones and dinosaurs were not enough to make the plot bizarre, the writers also add massive locusts which reportedly have been mutated and created in a lab by a company called Biosyn. When their daughter and Blue- the friendly neighbourhood raptor's baby dino gets kidnapped and flown to Biosyn for more experiments, Owen and Claire head out to search for their daughter and meet Dr Ellie Satler (Laura Dern), Dr Alan Grant  (Neil ) and Dr Ian Malcolm (Goldblum) near the lab site - in a jungle- infested by carnivorous dinosaours. The six have to not just escape a jungle that is doomed but also ensure that the inhabitants of the jungle are not further held captive by Biosyn for more lab tests and mutations.

With a plot that makes some of the silliest Salman Khan films feel like art in comparison, 'Jurassic World Dominion' is a 2 and a half-hour long ordeal where you often find yourself questioning the writers and their indulgent story. The veterans Dern, Neil and Goldblum bring back nostalgia for sure and some scenes provide thrills but overall - the narrative is downright silly and exasperating. It also doesn't help that Pratt and Howard share zero chemistry even after doing their films in the franchise.

When you give children to play with toy animals, you will often see them making these toys fight with each other. Kids' imaginations are wild and you will often find them making growling sounds as they make a toy dino eat up another similar dino or a toy tiger instead. Now imagine the same sort of fight happening on the big screen, where filmmakers are convincing you that two carnivorous dinosaurs are fighting amongst each other while a bunch of humans escape and board a helicopter unhurt from the same site. Seems wildly imaginative, right? 'Jurassic World Dominion' seems like a child's wild imagination being pelted as cinema.

Some would argue that superhero films too require a suspension of disbelief. Sure, but these films at least have a proper storyline to back what they are trying to project. In Jurassic World Dominion, the plot is bizarre, the stunts are repetitive and you know how it will all end.

In three decades since the first 'Jurassic Park' came out, a lot has changed in the world. There are films, special effects and stories that have been explored like never before and amid all of this- 'Jurassic World Dominion' seems like child's play or just perhaps very dated.