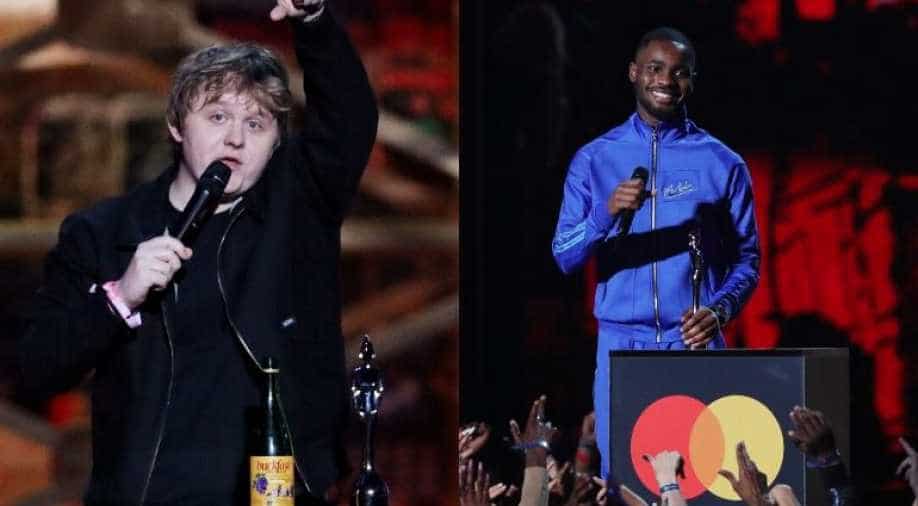 Lewis Capaldi and Dave were the big winners at the BRIT Awards. Photograph:( Reuters )

Scottish singer Lewis Capaldi and rapper Dave were the big winners at the BRIT Awards on Tuesday, in a ceremony packed with performances, including Dave`s lyrical attack on Britain`s prime minister who he accused of being racist.

Crowds cheered at Britain`s annual pop music honours, in their 40th year, as rapper Dave took full advantage of the spotlight and a prime-time television slot to make a political statement against Prime Minister Boris Johnson.

"It is racist whether or not it feels racist. The truth is our prime minister is a real racist," he rapped, in a powerful performance of his song "Black" on a white piano flashing with images.

Johnson has faced criticism in the past for referring to African people as “piccaninnies” with “watermelon smiles,” and this week a Downing Street aide was forced to resign over racist remarks.

Dave won the coveted album of the year award for his work "Psychodrama."

"You can do anything that you put your mind to," he told fans as he collected the award in a blue tracksuit.

Capaldi, who scooped two awards, sang his ballad "Someone You Loved" before receiving the award for best new artist, swigging on a bottle of beer. He later clutched a bottle of fortified wine to claim the award for song of the year.

"This has been the best year of my life," he said.

Grime artist Stormzy, named best male artist, was accompanied by a gospel choir, dozens of dancers, a fireworks display and indoor rain, as he performed a medley of hits with special guests including Burna Boy.

American teen pop sensation Billie Eilish, 18, captivated the audience with the first performance of the new theme song to the forthcoming James Bond film "No Time to Die." She was named best international female artist.

Mabel took home the award in the best female artist category, thanking her mother, the singer Neneh Cherry, who also won a BRIT award 30 years ago.

British television presenter Jack Whitehall hosted the show, paying tribute at its opening to Caroline Flack, the 40-year old television presenter who committed suicide on Saturday, sparking a debate about the aggressive manner in which the British tabloid press sometimes covers celebrities.

Veteran rocker Rod Stewart closed the show by performing "Stay with Me" with his old Faces band mates Ron Wood and Kenney Jones.