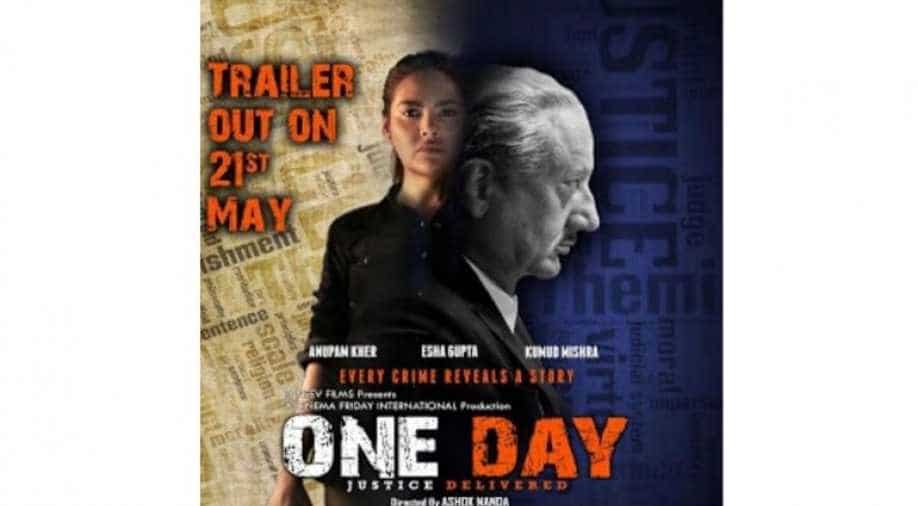 One Day poster Photograph:( Others )

The makers of Anupam Kher and Esha Gupta-starrer `One Day` once again pushed the release date of the film from June 28 to July 5.

The makers of Anupam Kher and Esha Gupta-starrer `One Day` once again pushed the release date of the film from June 28 to July 5.

Initially scheduled for June 14 the makers earlier postponed the release to June 28.

"We didn't get censor cuts clearances on time so film print could not be delivered to overseas distributors and we wanted the worldwide release on the same date. So we moved to 5th July with the joint decision of producer, director and distributor," the makers said in a statement.

Earlier, a video clip was released which featured a montage of slow, cryptic shots showcasing Anupam as a man engrossed in his thoughts.
In the video, Anupam is seen delivering his monologue.


The film`s tagline reads, `Where`s there is justice, there will be victory` which seems like the base of the movie and rightly sets the tone for the film`s subject.

The first poster of the film was released in February by the veteran actor on his Instagram account.

A judge on the day of his retirement discovers that his judgment had gone wrong in a couple of cases. Does he take the law in his hand? You all will discover that on the 14th of June. But today I am looking forward to the trailer launch of #OneDay. Directed by #AshokNanda.🤓😎 #KumudMishra @egupta #RajeshSingh

Going by the film`s poster, the story may revolve around a retired man who tries solving a crime to get justice.

The film also stars Kumud Mishra, Zarina Wahab, Zakir Hussain, Rajesh Sharma, and Murli Sharma. The flick which is helmed by Ashok Nanda is a thriller and is produced by Ketan Patel and Swati Singh.