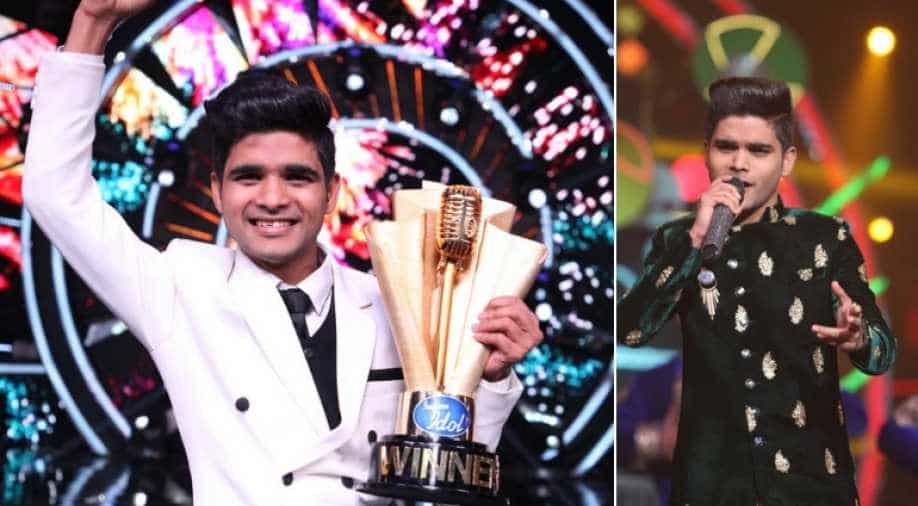 Salman Ali hails from a family of musicians in Haryana. (Image via Twitter/@SonyTV) Photograph:( Twitter )

Ali, who hails from a family of musicians, was awarded Rs 25 lakh and a Datsun car at the grand finale.

Salman Ali Of Haryana won the 10th edition of singing-based reality show 'Indian Idol' on Sunday in Mumbai. Ali, who hails from a family of musicians, was awarded Rs 25 lakhs and a Datsun car at the grand finale.

"I would like to thank the audience and the judges for making me the winner. People from my village are very happy. I am getting lots of calls. They are distributing sweets there and bursting crackers," Salman, who hails from Mewat, Haryana, told a news agency after his win.

The other finalists -- Nitin Kumar and Vibhor Parashar -- were handed over a cheque of Rs 3 lakh each.

"We are all like a family only. We used to crack jokes, help each other and have fun so, there was no competition. As far as being a winner is concerned, everyone comes here to win only. But I had thought that even if I didn`t win, at least I got a lot of love from the audience," Ali further said.

With the winning amount, Ali would first like to fix the roof of his house. The 20-year-old singer, who belongs to a humble background said, "I come from a very poor family. My house is also not in a good condition. The roof of my house needs to be fixed. We had taken loan also. So, I would like to use the money for all this. I want to take my life forward with this money."

Ali, who has studied only till the ninth grade started earning when he was just seven years old.

"I have just studied till ninth or 10th grade. We have our family business which is singing. So, I started earning when I was just seven years old," he said.

The young singer also wants to try his luck in Bollywood.

"I want to do a lot of things in my life. I want to do something in Bollywood. A lot of people from Bollywood had come on the set of `Indian Idol`. A lot of them even praised me. So, I am sure they will give me a chance and I will prove myself," he said.

He has already sung a song for Varun Dhawan-starrer 'Sui Dhaaga: Made In India' and TV show 'Chandragupta Maurya'.

The contestants sing a beautiful medley of his songs, and @iamsrk can't help but join them on stage. #IndianIdol pic.twitter.com/6t2dOQH0Hw

The finale also saw the show`s judges Neha Kakkar, Vishal Dadlani and Javed Ali setting the stage on fire with their performances.

Singer Anu Malik, who had to step down from the jury panel of the show in October after being accused of sexual misconduct, was not part of the finale.