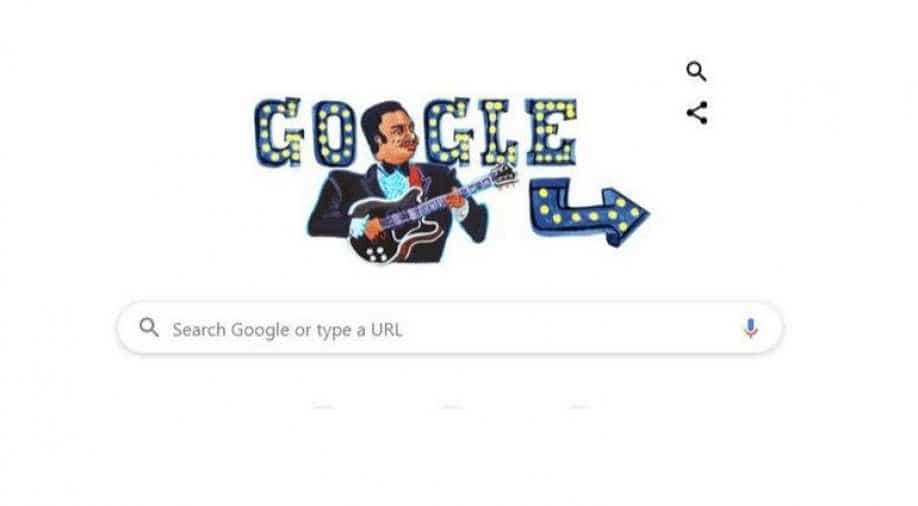 Blues musician BB King is considered one of the most remarkable musicians of all time and won the Rock and Roll Hall of Fame in the year 1987.

Monday`s Google doodle dedicated to the ace singer-songwriter, guitarist, and record producer, features a vibrant animated video coupled with his soulful track and shows the iconic Singer holding a guitar.

In 1925, King was born near the town called Itta Bena in Mississippi. He started his recording career in 1949 and gave his first hit ` Three O`Clock Blues`.His most popular classic pieces remain `The Thrill is Gone` and `Every Day I Have the Blues`.

While his professional life was prosperous, the singer struggled to balance his personal life. He got married twice- first to Martha Lee Denton and then to Sue Carol Hall. However, both his marriages failed.

Blues musician BB King is considered one of the most remarkable musicians of all time and won the Rock and Roll Hall of Fame in the year 1987.

In its note, Google stated that King`s love for music was so that once in 1949, King rushed inside a burning nightclub, risking his own life for his beloved guitar.

Talking about how BB King`s topic is relevant to them personally, the guest artist Steve Spencer said, "I saw BB open for a much more well-known act way back when. The more well-known band only played for 23 minutes. Afterwards, I looked to the right of the stage and saw BB talking with the musicians in that band. He then came out and played for an hour with the bigger act`s band. I was completely won over by his generosity of spirit. He already had me as a musician, but he then won me over as a person."

Further opening up about her reason the guest animator Nayeli Lavanderos said, "I`ve always liked BB King`s music and felt honoured to pay a tribute to him using my artistic skill."