'Game of Thrones' season 8 episode 1 was all about reunions, Jon Snow & his dragon and thankfully no White Walkers 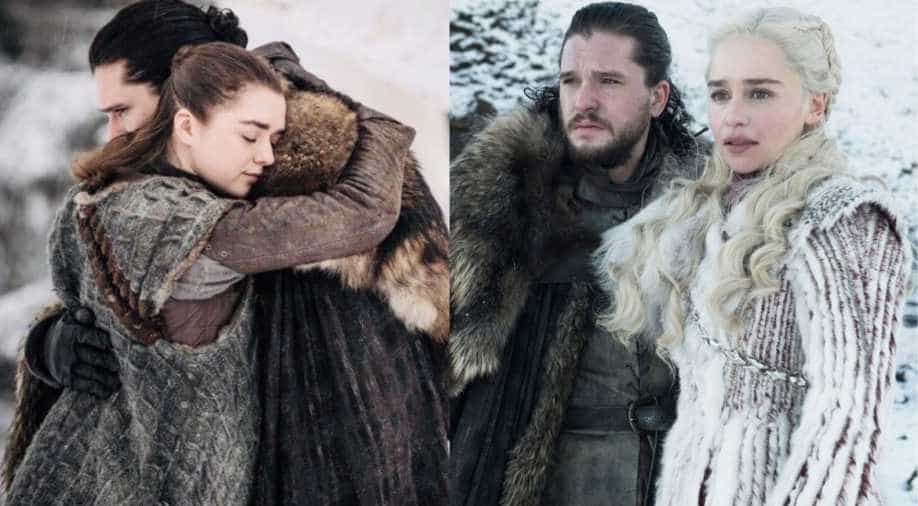 The wait is finally over as ‘Game of Thrones’ released its first episode of the last and final season today. Having made us wait for more than two years as the last we saw the show was in 2017 -- it kept its promise of entertaining the audience with each important character having something to add.

All those who haven’t seen the first episode still, the article is loaded with spoilers, so go ahead at your own risk.

The episode started with Arya Stark looking on as Daenerys Targaryen and Jon Snow ride to Winterfell with her army of the Unsullied and Dothraki by her side. The Starks and the other Northerners don’t feel too happy on seeing them. It is revealed in this episode to the Northerners that Jon has sworn his loyalty to Queen Daenerys and is no longer the King of the North. Nobody likes the idea, not even the sisters Arya and Sansa. This could possibly create a rift between the Northerners in the future episodes to come as it's established before that they don’t trust any foreigner but only one of their own. They rallied behind Jon in the last season but whether they continue to do so in the future episodes, is difficult to say.

There were also some major reunions, like Jon and Bran Stark, the youngest of the Stark alive who meet for the first time after the first season. Sansa and Tyrion Lannister also meet for the first time after they last saw each other at Joffrey Baratheon’s wedding where both were charged for his murder. They discuss the murder and how they survived this long. Jon and Arya Stark also have a reunion-of-sorts when they discuss how she still keeps her needle that Jon had gifted her before they parted ways. Between them, Arya gives him a powerful message to remember that he is part of the Stark family and he should remember where his loyalty lies.

Jaime reaches Winterfell and sees Bran for the first time since he threw him off the tower in season 1. It's possible that he learns something about himself from Bran, now that the Stark sees visions and can tell something more about what happened really when the Kingslayer killed the Mad King.

Greyjoys also get their due screen time as siblings Yara and Theon reunite when he saves her from Euron’s captivity and she sails to the Iron Islands while Theon goes to Winterfell to fight with the Starks. The Greyjoys and their lands could prove beneficial to the Stark-Targaryen clan as it's noted before that the White Walkers can't swim.

Westeros is quite peaceful in the episode with what we are sure is just lull before the storm. Cersei is obviously up to something, we have been thinking like that ever since she agreed to send her Army to fight the Walkers. Her Hand also mentions that the Queen has other plans for the Targaryen girl. He then offers a crossbow to Bronn saying the Queen wants him to kill Queen’s treasonous brothers, that is if they survive the North expedition, as part of “poetic justice”. If you remember, this is the same crossbow with which Tyrion killed father Tywin Lannister when he discovered his lover Shae in Tywin’s bed. This is the same crossbow that Joffrey used to keep and has killed some with.

Meanwhile, there’s a lot of romance and passion between Daenerys and Jon in the episode. Everyone agrees in Winterfell that they make a good couple but what takes the cake is that Jon finally sits on a dragon and flies with Daenerys. Watch the trailer of the second episode here.

Jon also gets to meet Samwell Tarly who tells him that he is the true heir to the Iron Throne as he is the son of Rhaegar Targaryen and Lyanna Stark and that Ned kept his word by not telling anyone the truth. Sam also learns the truth of her father and brother getting killed by Daenerys when they refused to bend the knee. This could prove vital in Sam turning Jon against Daenerys, also after he revealed that Jon is the true heir and not the silver-haired girl who is now her proven aunt. Sam's words hint at a possible future when he asks Jon whether she will give up her crown to save the people like you did?

Among other things, Night King kills Lord Umber to send a message to the Northerners. Arya meets Gendry (Bastard of Robert Baratheon), Tormund and all others at Castle Black are finding their way out as a portion of the Wall has caved in and the ‘Winter is here’.

Next episode will air next Monday.