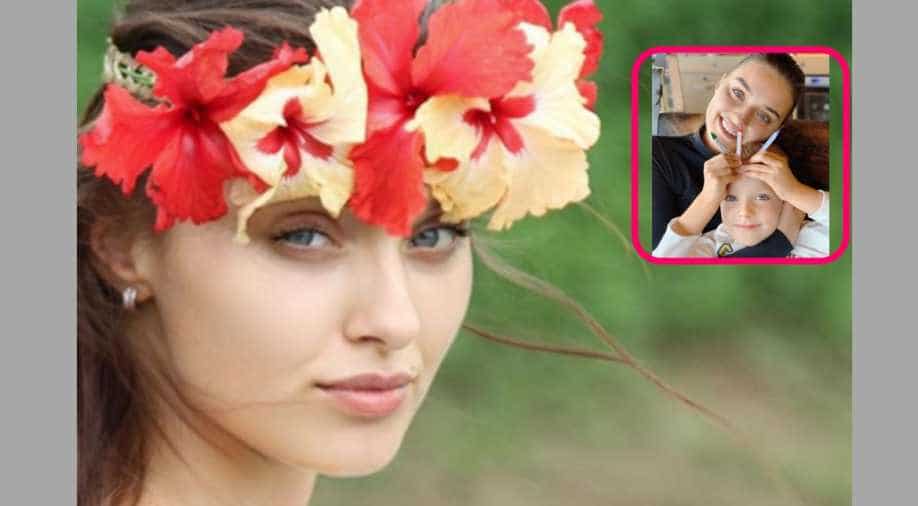 File picture of Veronika Didusenko and a picture of her with her son Photograph:( Instagram )

Didusenko was crowned Miss Ukraine in 2018, but was dethroned after the organisers found out that she has a five-year-old son and disqualified from going on to compete for the Miss World title.

A former Miss Ukraine stripped of her crown and barred from competing for Miss World because she is a mother has launched legal action against the contest, demanding a rule change.

“We demand a change of rules, @missworld”, allowing all women to participate, 24-year-old Veronika Didusenko said on her Instagram on Monday after launching a campaign called #righttobeamother.

Didusenko was crowned Miss Ukraine in 2018, but was dethroned after the organisers found out that she has a five-year-old son and disqualified from going on to compete for the Miss World title.

“The reason I was not allowed to compete in Miss World after winning the title #MissUkraine is because I had been married and have a child,” she wrote on Instagram.

The rules of Miss World ban mothers and married women from taking part in the beauty pageant and oblige the contestants to sign a corresponding agreement.

Didusenko accused organisers of “discrimination” and said that global beauty pageants “seem to be stuck in the dark ages”.

“I don’t want the crown back,” she wrote on her Instagram page on Sunday.

“I want to get the rules changed for a wider society.”

See pictures of Didusenko with her son:

His love is “as big as a billion elephants” and it’s all mine. He is determined to protect me from all the villains of the world. He doesn’t ask for much in return for his unconditional love and devotion, only a smile on my face, a kiss on his forehead, a bedtime story... He is my best friend, someone who feels my deepest emotions like no one else. ⠀ Having him in my life has been the biggest gift. Happy birthday, Alex, love of my whole life and beyond♥️ Can’t believe you are already 5!

Hi guys! I thought it's time for us to get to know each other a bit better✌🏻 I realise some of you have been with me since the first day on IG but some have only joined later. So here is a quick snapshot of my life. ⠀ I am 23 and I am a mother to a 4-year-old boy Alex. I have a university degree in Mechanics and Mathematics. And I am also a fashion model titled Miss World Ukraine'18. A few days after the contest I was disqualified for the reason of being a single mom. This experience has also laid start to my campaign #righttobeamother which aims to change the rules of the world's four largest beauty pageants - @MissWorld @MissUniverse @Missearth and @MissInternational - to include mothers, divorced, and married women. In other words, to put an end to discrimination towards women based on civil status in pageantry and modelling. ⠀ I believe that women must have the freedom of choice to do what they want in life regardless of their civil status, age, ethnicity, and sexuality⚡️I also believe that motherhood is not a verdict and our children need mothers who are treated with respect across all occupations. ⠀ Tell me about yourself. What do you do, where are you from? Also, what else would you like to know about me?😌

Didusenko has launched legal action in London claiming Miss World organisers are breaching the terms of the Equality Act of 2010 that protects against discrimination based on certain characteristics, including marriage, maternity and gender.

There has not yet been any comment from Miss World on the issue.

This year, the Miss World final will take place in London on December 14. Ukraine will be represented by Margaryta Pasha, a law student.

Miss World is the world’s oldest beauty pageant, first held in Britain in 1951.