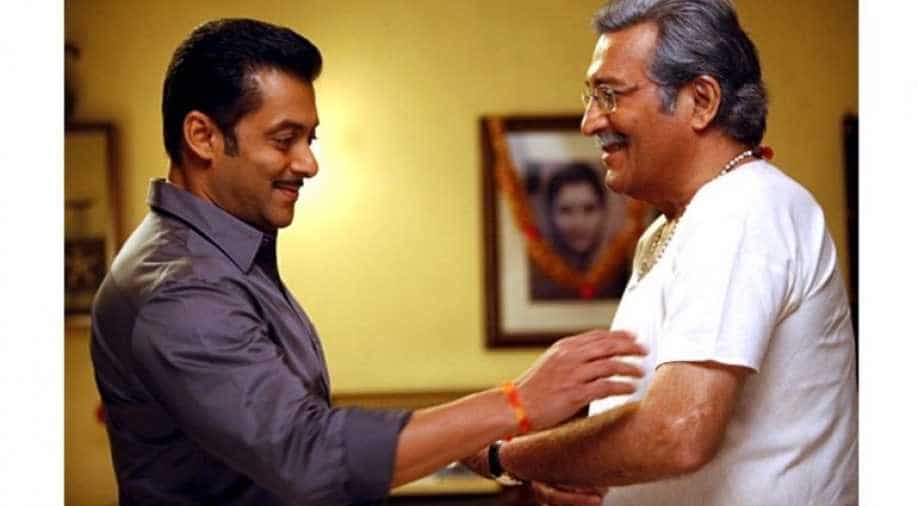 Salman Khan and late actor Vinod Khanna in a still from 'Dabangg 2'. Photograph:( Others )

Vinod Khanna died of cancer in 2017. The veteran actor had played Salman Khan's father in both 'Dabangg' as well as 'Dabangg 2'.

There is a new addition to the star cast of 'Dabangg 3'. The Salman Khan, Sonakshi Sinha starrer introduced their new cast member along with director Prabhu Deva in a new video on Twitter.

Veteran actor Vinod Khanna's brother Pramod Khanna has been roped in to play the character of Prajapati Pandey, which was earlier played by the late actor, in the film. Vinod Khanna died of cancer in 2017. The veteran actor had played Salman Khan's father in both 'Dabangg' as well as 'Dabangg 2'.

Salman uploaded a video on Instagram where he presented the character of Pramod. The video opens up with the portrait of Salman and Vinod together and later the actor along with Sonakshi and director Prabhu Deva introduces Pramod, who is see dressed identically like Vinod in the portrait. Sonakshi can be seen in the get up of Rajjo while Salman in the costume of Chulbul Pandey. "Introducing Pramod Khanna," `Bharat` actor captioned the video.

Sonakshi has been sharing stills and behind-the-scenes pictures from the sets.The actor shared a mirror selfie on Instagram from the sets of the upcoming movie. In the still, the actor can be seen dressed up in a black outfit. But it`s her hair and makeup that is sure to leave fans excited.
Salman kicked off the shoot for the film on April 1 when he jetted off to Maheshwar, Madhya Pradesh to shoot with Arbaaz Khan and Prabhu Deva who has come on board as the director.

The film marks the second collaboration of Salman and the director. The two have previously worked together in `Wanted`. As per media reports, Arbaaz will once again be seen playing Makhanchand Pandey alias Makkhi in the film. The movie is being produced under the banner of Salman Khan Films and Arbaaz Khan Production. It is scheduled to release on December 20 this year.