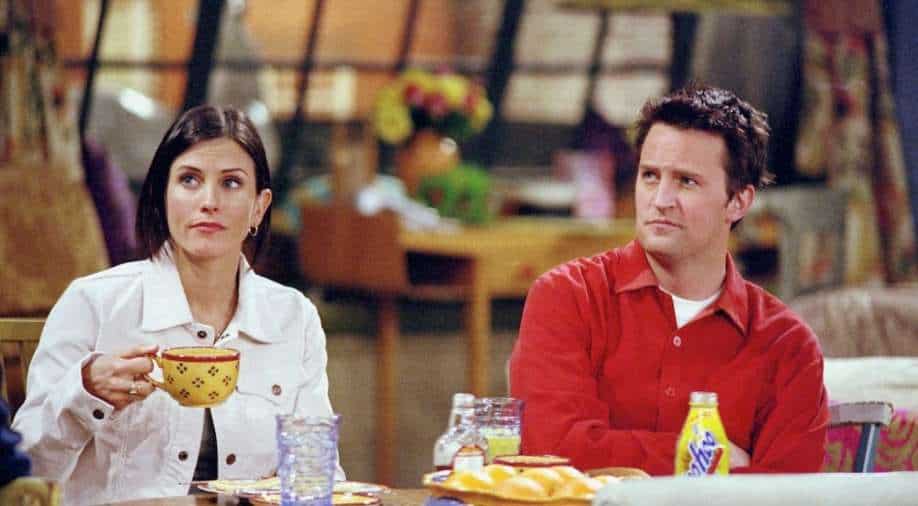 Courteney Cox and Chandler Bing in a still from 'Friends' Photograph:( Twitter )

Matthew Perry was subjected to criticism for slurring his speech during the 'Friends: The Reunion' special last May.

Courteney Cox has opened up about her 'Friends' co-star Mathew Perry and his days of struggle. Cox spoke to a media outlet recently and revealed that Perry had put himself under a lot of 'pressure' while playing Chandler Bing in the hit sitcom.

Perry was subjected to criticism for slurring his speech during the 'Friends: The Reunion' special last May.

It was reported at the time that Perry had undergone an emergency dental procedure shortly before filming the reunion special. "He's just struggled for a while. I think he`s doing great now," Cox said.

In the past, Perry has been open about alcoholism and addiction.

"It wasn't my intention to have a problem with it," Perry told People magazine in 2002 of his use of Vicodin.

"But from the start, I liked how it made me feel and I wanted to get more," he added. Years later, in 2016, Perry admitted that he didn't remember filming some of the 'Friends' seasons."I don`t remember three years of it," Perry told a media outlet.

"I was a little out of it at the time -- somewhere between seasons three and six."Then, during HBO Max's 'Friends' reunion special last year, Perry admitted that his portrayal of Chandler Bing, and the audience's reaction to his performance, greatly affected his mental health.

"For me, I felt like I was going to die if they didn't laugh," he said.When asked about Perry's remark from the reunion, Cox said recently, "That was a lot of pressure he put on himself. That's a lot to think how much he relied on that for his own self-worth."

As for Cox, the 'Friends' reunion "was fantastic to see everybody again, reminisce and realize how much fun we had," she said. "Every now and then I`ll see an episode and [think] this is still relevant and still funny," and added, "I'm glad that (Friends) has gone through this many years and people still love it. If they stopped caring I would feel worse."

Perry is set to release an autobiography in November, titled 'Friends, Lovers and The Big Terrible Thing', reported People magazine."So much has been written about me in the past," he said.He added, "I thought it was time people heard from me. The highs were high, the lows were low. But I have lived to tell the tale, even though at times it looked like I wouldn`t. And it`s all in here. I apologize it`s not a pop-up book."

Cox reunited with Perry, Jennifer Aniston, David Schwimmer, Matt LeBlanc and Lisa Kudrow for the 'Friends: The Reunion' special, which was hosted by James Corden and aired in May 2021.