Saransh Goila explains why molecular gastronomy does not stand a chance in Indian cuisine, fusion & food trends to look forward to 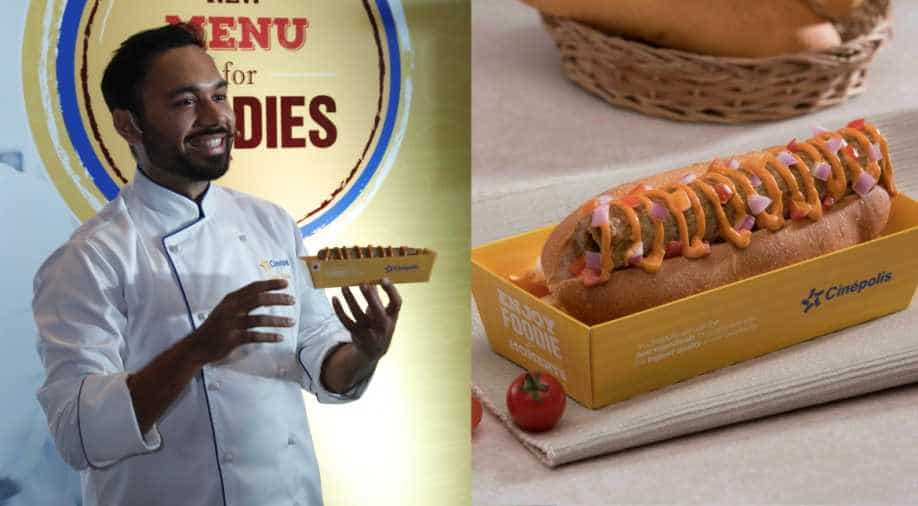 As Cinépolis chain of theatres introduced a new menu for food lovers, in collaboration with the internationally-acclaimed chef Saransh Goila, we got in a conversation with the celebrity chef who took butter chicken to Masterchef Australia about the hits and misses in the food industry.

India is one of the biggest markets to tap into for theatre owners around the world as people widely opt for a cinema-hall experience vs an in-home theatre when they want a wholesome entertainment outing. Keeping this in mind, India’s first international movie theatre circuit, Cinépolis, has introduced a new menu of over 100 dishes for food lovers to enhance their movie-watching experience. They have collaborated with the globally-acclaimed chef Saransh Goila who took about six months to curate what they call the 'finest experiential entertainment with the gourmet-inspired food menu'.

On the launch, Devang Sampat, Director - Strategic Initiatives of Cinépolis India, said, “With this, we endeavour to set new benchmarks in the in-theatre dining. The new menu will be available across India and standardize the F&B offerings of the brand, delivering the same taste and quality to patrons visiting our cinemas.”

Saransh, who was present at the launch, on his association with the brand said, “They wanted some Indian elements in the menu. I realise that I am somebody who believes in Indian spices and dishes, having travelled extensively in India. I can add value to a cinema’s menu from an Indian perspective.”

He included dishes like bun seekh, chaat and desi pav to the menu. “We are very American in our thought, we like to eat pizza, burgers when we are watching a movie but there are so many varieties of Indian dishes that we can eat while watching a movie. The idea was to make all of this cool, present it in a form like a snack where you don't need plates or bowls,” Saransh said.

Saransh, who is a popular name in the international food industry always wanted to be a chef. He started cooking at the age of 12. “I told my parents that I wanted to be a chef. When the time came to choose a career, my grandfather suggested that I enrol into hotel management. My parents wanted me to be a biotech engineer. I followed my passion and that's how I became a chef,” he said.

As a school kid, he also had an inkling towards theatre as he thought he was “good onstage”. He said, “I wanted to explore that journey but nobody in the family agreed. I pursued it in different ways -- when I started teaching people how to cook, started doing TV. I combine my cooking and acting skills now.”

Saransh has taken the quintessentially Indian meat dish butter chicken to the famous TV show 'Masterchef'. Calling his relationship with the dish a “strange one”, he said, “I am somebody who started out with regional Indian food and my butter chicken recipe became really popular. I didn’t choose it, it chose me in that sense. It became so popular that I couldn't stay away from it, found business and entrepreneurial possibilities with it. It became a conversation starter when I went out. That was a great point for me to run a butter chicken brand.”

He went to Masterchef Australia as a guest where the contestants had to prepare butter chicken like him. Proud at being a part of the great show, he said, “It does add value in many ways to my career. It gave me a global platform. Suddenly the messaging became more about me as a stakeholder in my cuisine, it’s no more about ‘I want to become popular or I want to grow as a brand’. I have been invested with the power to promote what Indian cuisine is all about. It gave me a great opportunity so it's changed my thought process as a chef. I have to be more responsible for my actions. I chose my time very wisely.”

All over the world, restaurateurs and pub owners introduced a variety of molecular gastronomy in their menu in the last couple of years. As a chef, however, Saransh says he never believed in it. “I knew it was a fad that's going to die down. The creator of molecular gastronomy had a very different take on it where he was experimenting with the nature of food, the science behind it. He is a food scientist who created something that was theatrical. It was magical what he made but then it got copied very cheaply all across the globe, not just in India. It became a gimmick, and that's not what the intent was,” he said.

The celebrity chef explained, “It's exciting at first but you don't go back to a restaurant that’s giving you fumes or bubbles. There's a reason for that because it's not tasty. I feel molecular was one of those trends that according to me does not have a place in our cuisine. Any Indian molecular restaurant according to me is something that should not exist.”

At the same time, he is all for fusion food as he said, “Fusion is great but there's a thin line that separates fusion from confusion. It takes a person who understands textures and flavours to be able to fuse two different cuisines. It's doable if you can do it but sometimes it falls flat as well. I have been to some great fusion restaurants in the last year but I have equally seen bad restaurants.”

Traditional food has a novelty factor believes Saransh who is all for restaurant owners and chefs to cater to original Indian food style. He said, “You need people who save what’s traditional because no matter how much we look towards evolution in modern Indian food, there is nothing as comforting as dal and chawal. We need a reality check in that aspect as I feel Indian dining in the process of getting evolved has gone onto some random fusion rage. There has to be a space for quality establishments that deal with serving authentic traditional Indian food because nobody anymore does that. What had to change was the setup, the ambience and the way food was served. A lot of people have changed everything, they work on a cut-copy-paste model, with low light and multi-cuisine menu. They all look the same now.”

Among the trends that will survive after five years according to Saransh are “good tasting, quality traditional food which was evolved based on techniques and not on fusion.”

He added, “Regional food wave is still very strong that's and that’s what’s going to continue. People are going to look inwards in their community, regional pop-ups will happen. I have heard of Bihari pop, Coorgi pop up that’s happening. I am guessing they will also get converted into restaurants or at least delivery services. Food that is getting extinct or not many people are talking about it will land on the food map this year.”