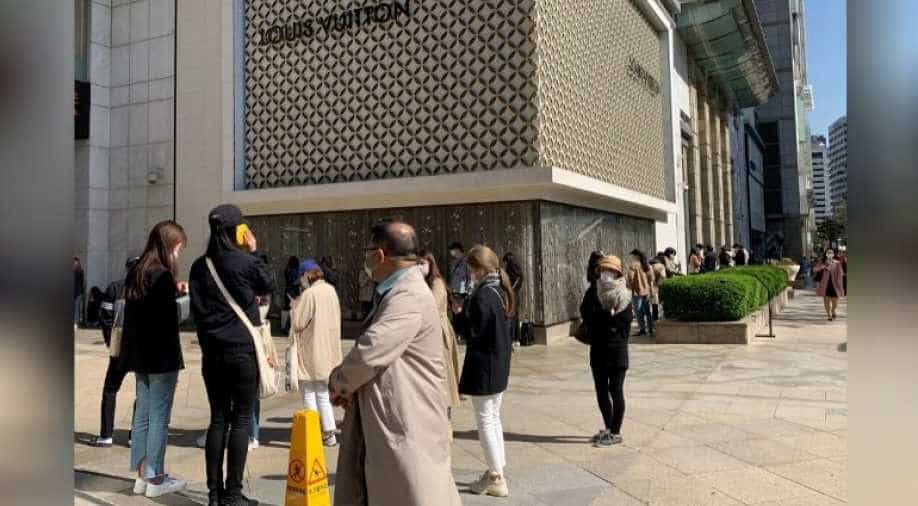 People queued up outside Chanel stores in Seoul as early as 5 am on Wednesday Photograph:( Reuters )

More than a hundred shoppers waited in line to enter a store of the French luxury brand in Seoul on Wednesday, shrugging off concern about a second wave of novel coronavirus infections to beat imminent price hikes.

People can go the extra mile, and in this case risk their health, to own a coveted Chanel product. The French luxury brand has reportedly increased prices of their products which prompted the people of Seoul to queue up in front the local stores as early as 5 am to buy bags before the hike hit Asian markets.

More than a hundred shoppers waited in line to enter a store of the French luxury brand in Seoul on Wednesday, shrugging off concern about a second wave of novel coronavirus infections to beat imminent price hikes.

Lee Ji-yeon, 54, said she arrived at about 7:30 a.m. and that her future son-in-law was at another department store to buy a Chanel bag for her daughter as a present for their wedding, which the virus had pushed to next year from November.

"We`ve been to the Chanel store several times before and agonising whether to buy it or not. But since the prices are going to increase, we decided to buy it now," Lee said.

Many South Koreans gift luxury bags for weddings, including a man in the queue who also said his wedding had been postponed.

A Chanel public relations representative in Seoul said the firm raised prices in its home market of France on Monday, and that prices would increase in all of its markets eventually.

"In these challenging times for our manufacturers and suppliers, it is essential for Chanel to continue to support them in the best possible way," the Paris-based firm said in a statement.

Lotte Department Store said luxury goods sales jumped 30% over May 1 to May 10 versus the same period a year earlier, outperforming overall sales.

Moon attributed the spike to pent-up demand from people staying at home to avoid the virus, as well as from those who would usually purchase luxury goods abroad where they can be cheaper, but who have been unable to travel during the pandemic.

South Korea is the world`s eighth-biggest luxury goods market, showed data from researcher Euromonitor. The country has recorded almost 11,000 cases of COVID-19 - the respiratory disease caused by the virus - and over 250 deaths.

People in the country have been flocking to shops since the government this month began easing social distancing guidelines aimed at containing the virus, indicating a release of pent-up demand from people who refrained from going outdoors.

However, the Chanel queue formed just as more than 100 new COVID-19 cases linked to nightclubs in Seoul brought fear of another wave of infections in a country held up as a coronavirus mitigation success story.

BTS star RM reveals the most famous Indian song in South Korea. No, it's not from Bollywood